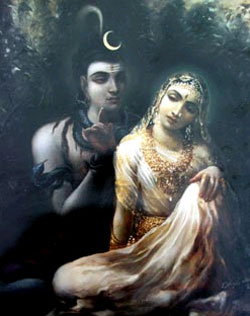 You may also like to read: Pradosh Vrat in 2013

Pradosh fast is kept two times a month. Abiding by the Hindu Lunar Calendar, this fast is kept on Purnima and on Amavasya. In other words, it is observed on every Trayodashi tithi.

Many years ago, the great Brahma and Vishnu were in an intense debate. Each of them felt that they were the greatest. Apparently, there was no end to this argument so the supreme Mahesh stepped in and put Brahma and Vishnu into trial. A great pillar of fire emerged from heaven. Mahesh instructed them to distinguish the starting and ending point of the pillar. After much struggle, Brahma and Vishnu submitted themselves to Lord Shiva as they were unsuccessful and consented that he was indeed the greatest of them all. Some books relate the pillar of fire to a huge Linga. Hence, from here we get the concept of Sivalinga.

The day of Pradosh Vrat is also linked with Lord Shiva and Parvati’s marriage.

All the legends concerning Lord Shiva display his greatness. Another very popular story of his greatness is when the ocean was being churned by the Lords and demons, a number of precious objects emerged from the mighty ocean. One of them was a poison called Halahala. This poison had the capacity to destroy the entire world. Lord Shiva consumed it as an act of saving the world from destruction.

The first of its kind is Nitya Pradosh. This fast is not very common. Devotees observe this Vrat every evening between the period of sunset, till all the stars are visible in the sky.

In Paksha Pradosh, fast is observed on every fourth day after Amavasya (New Moon). Maasa Pradosh is the other name of Krishna Paksha and this is observed twice a month. This is the most common Pradosh Vrat that devotees follow along with Pralaya Pradosh.

Pralaya Pradosh is also observed twice a month, i.e., on the 13th day of the lunar calendar. Lastly, Maha Pradosh is Krishna Pradosh that falls on Saturday. This is also called Shani Pradosh. Shani Pradosh is a very important fast. All the fasts are observed from the evening. The practise of observing this fast is most common in South India.

There are two methods of performing this fast. Some people fast for the entire day. In this case, fasting is not just not eating anything; it includes sleep. People observing this fast do not sleep even at night. On the other hand, there are people who fast for the entire day and break it in the evening after conducting Shiva Puja. It is considered auspicious for couples to observe this fast together.

The very first step that people need to take during Pradosh Vrat is rise up early in the morning, i.e., before sunrise and have a bath. Then worship Lord Shiva along with Goddess Parvati, his wife. After this devotional ceremony, the stories of Lord Shiva are narrated, by Pandits or any other devotee. After this some Mantras are recited. Most important of them all is Maha Mrityunjaya. This verse is recited one hundred and eight times. During this worship a pot of water is placed in front and is worshipped as a representation of Shiva. The water from this pot is distributed to all the devotees. To conclude with the ceremonies, a piece of cloth, a portrait for Lord Shiva and some other gifts are offered to a Brahmin.

Codes of Discipline on Pradosh Vrat

There are some codes of discipline that you need to observe while performing Pradosh or Pradosham Vrat. A devotee must not cause injury to anyone. An injury caused to any living being may result in nullifying your fast. You must speak the truth. As it is said, "Satyameva Jayate"- Truth alone triumphs, you must be truthful as this will keep Lord Shiva even more pleased with you. You must have compassion and a sympathetic heart. You must be able to forgive others. When you fast, you ask Lord Shiva to forgive you from all the sins that you may have committed. He will forgive you just like he forgave the Gods and demons for imposing danger on both the worlds that were grave enough to destroy them. But, to receive that forgiveness, you need to have a forgiving heart too. You must have self control. This self control can be in terms of the food you consume. It could also refer to abstaining from worldly pleasures that are far from your requirements. In case you possess the negative quality of getting easily angered, restrain yourself. If you tend to indulge in activities that can harm someone else, restrain yourself. Even if you are in an argument with someone, sort it out with peace. You must not be envious during Pradosh Vrat. And lastly, try to ignore your slumber if you have vowed to observe fast for 24 hours.

There are no unremitting rules on Vrat for hindus. You must observe fast as per your convenience. The most prudent part of all rituals is that, you must carry them all with a pure heart, true sincerity and devotion. There are some people who will tell you to light hundreds of lamps on Pradosh Vrat. But, even if you light one lamp, Lord Shiva will be immensely pleased and grant you all your wishes. The main purpose of Pradosh Vrat is to simply ask Lord Shiva for forgiveness, prosperity and joy. These are enough for you to achieve Moksha (salvation).