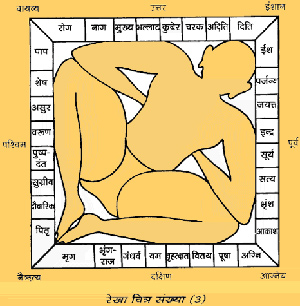 1) Entrance should preferably be from the north or east with more door and window openings in these directions.

2) An underground water-tank or a well should also be situated in the north eastern part of the plot.

3) The kitchen should preferably be in the south-east or in the north-west as second best- The Toilets should be avoided in the south-west and north-eastern corners of the house.

4) The levels in the north and east of the plot should be less than those in the south and west. The surrounding levels should be such that the natural rain water flows towards the north or east,

6) The plot should be either a square or a rectangle with its south-west angle of a 90 and north-east angle of less than 90.