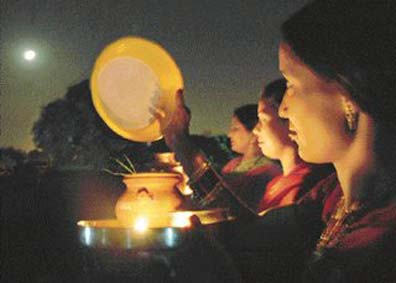 Karva Chauth 2017 date is 8 October, Sunday. Karva Chauth is an annual one day Hindu festival. The festival is also celebrated by Sikhs on large scale. Women fast for the whole day for the longevity and prosperity of their husbands on the day of Karva Chauth. The fast is observed mostly in the northern region of India including, Uttarakhand, Uttar Pradesh, Haryana, Punjab, Delhi, parts of Jammu Kashmir, Rajasthan, Chhattisgarh, Jharkhand, Madhya Pradesh and Gujarat. As per our Hindu Lunar Calendar, it is observed on the 4th day of Krishna Paksha in the month of Kartik.

The Legend behind Karva Chauth

The Story Of Queen Veeravati

Queen Veeravati was a loving sister of seven brothers. She spent her first Karva Chauth as a married woman at her parent's house. She started her fast for the day and strictly followed it. But by evening she was desperately waiting for the moonrise as she was starving. Her seven brothers were unable to see the state of their loving sister and made out a plan. They created a mirror in the pipal tree so that it appears as if the moon has risen. The sister mistook the mirror as moon and broke her fast. The moment she took her first bite, news came that her husband is dead. She was heartbroken and kept weeping for the whole night. Finally, her prayers to the supreme goddess were heard and the goddess appeared. She asked that what her matter of concern was. Veeravati revealed her distress and then the goddess narrated to her the whole story that how she was tricked by her brothers. The goddess instructed her to fast again on Karva Chauth following all the rituals and traditions.

Veeravati then repeated the fast with pure devotion and following all the rituals. This forced Lord Yama- the god of death, to restore her husband back to life.

Another variant of this story is also very famous. In that story, the seven brothers build a massive fire behind the mountain and convince their sister to break the fast as the moon has risen. She breaks her fast and news arrives that her husband is dead. Devi Parvati then revealed the trick to her and cuts her own little finger to give a few drops of her sacred blood to Veeravati. She also instructed her to carefully fast in the future. Veeravati reaches her husband's house and sprinkles some drops of blood on her dead husband. Regaining his life, both of them reunite.

The Legend of Karva

Once there was a woman named Karva. She was truly and deeply devoted to her husband. One day her husband was bathing at the riverside. There, he was caught by a crocodile. Karva immediately ran and bound the crocodile with a cotton yarn and requested Lord Yama to send the crocodile to hell. Yama refused. She yelled and threatened to curse Lord Yama. He afraid of this devoted woman sent the crocodile to hell and blessed Karva's husband with long life. Karva and her husband then enjoyed a wedded bliss. Since this day, Karva Chauth is celebrated with great devotion and great faith.

The Rituals Of Karva Chauth

Karva Chauth can only be completed when all the rituals are performed properly. The preparations of Karva Chauth start many days before the festival. Women buy colorful bangles and clothes along with the 16 'Shringaar' items of cosmetic. On Karva Chauth, women wake up early and take bath. They start their fast as the sun rises. Women do not eat on Karva Chauth and some even abstain from drinking water. Women apply henna on that day. The women on the eve of Karva Chauth dress as a new bride. They hear the story of Karva and pray for the long life and prosperity of their husbands. They light the earthen lamp in their thali. They wait for the moon rise. As the moon rises, they perform aarti of their husbands and drink water with their hands, concluding the fast.

This was the story of Karva Chauth and the rituals that are followed on this particular festival. Women have a strong belief on this festival and they perform all the rituals with pure heart and devotion.

With this, we wish you a happy Karva Chauth..!