We bring you the dates of Sharad Navratri in 2015. These nine days are the time to be blessed with the serenity of Goddess Durga, as she transcends on earth. Read on to know more about the significance of Sharad Navaratri in 2015 and how it is going to enlighten your lives. 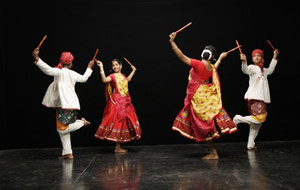 Navratri is a nine day Hindu festival, which comes five times in a year. The festival of Navratri is dedicated to Hindu Goddess Durga and her nine main incarnations. Throughout the nine days, each incarnation of Maa Durga is worshiped. Navaratri is a Sanskrit word, which has been made combining two words - Nava & Ratri. Nava means nine and Ratri means night. Sharad Navratri is the most important one amongst all 5 Navratri.

About Sharad Navratri In 2015

Sharad Navratri in 2015, like every year, is beginning from the bright fortnight of the Hindu month Ashwin and will go upto the tenth day according to Hindu calendar . As Hindu calendar is a lunar calendar, sometimes this nine day festival expands or contracts in terms of days as compared to Gregorian calendar.

In Gujarat, Navratri is one of their main festivals and they welcome it with Garba as well as Durga Puja. At different areas of the state, people set up Pandals with Garba groups and live orchestra. Along with Garba, there is a dance form 'Dandiya-Raas', which is quite famous in Mumbai and Gujarat. Since last few years, Gujarat Government has increased its tourist count by arranging "Navratri Festival Celebrations". People from many countries participate in this festival, including Canada, UK and USA.

On the other hand, Goa has its special way of celebrating Navratri. Zatra begins during Navratri there and entire (Ponda) Antruz is highly ornate. Saraswat Brahmin temples are incredibly decorated and the idols are brought out for worship. Idols are beautifully dressed as well as adorned with vermilion (Sindoor), sandalwood paste, turmeric (Haldi), and flowers. Devotees visit the idols in huge mass to get blessings and Kaul Prasad, which is considered to be given by gods directly. At the time of Navratri the 10 sisters of Goa, Dasha Maitrikas are taken out to worship. These are named as - Shantadurga, Aryadurga, Mahalasa, Katyayani, Mahamaya, Kamakshi, Vijayadurga, Bhumika, Mahalakshmi, and Navadurga.

People of Tamil Nadu make steps and place idols on the top. They name these idols - Golu.

Similarly, festival of Sharad Navratri is celebrated all over India in different forms, as it is to commemorate the arrival of Goddess Durga. Sharad Navratri is the biggest and longest festival of India. That is why it has a great significance amongst all the countries across seven seas. It is believed that worshiping Goddess Durga during this time, brings immense prosperity and fortune in the lives of devotees.