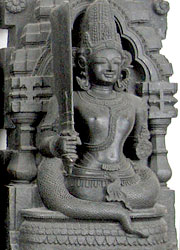 In Astrology, Keth is also said to be a 'Node', 'Chayagrah or Shadowy planet like Rahu, as it has no mass shape or substance and is not verified by visual observation. In Hindu Mythology, Kethu represents dragon's tail. This Chayagrah is also malefic and cruel in nature. Kethu has celestial points on the Zodiac, with regulated movement and orbit and that it has a distinct and predictable influence on horoscope.

Westerner Astrologers also call Ketu as Cauda. Kethu does not own any zodiac sign but has a strong influencing power. Kethu is considered as south node or descending node of Moon. Fire or accidents, past karma, broken relations, magical power, assassination, deep thinking, and desire for knowledge, changing events, spiritual growth, comets, cheatings, and mental illness are associated with influence of Ketu.

Ketu dasha cycle or the time period under the influence of Kethu is very unsuspicious period and results extreme depressing events in life. This period generally lasts 7 years in person's life.

Ketu is also said to be a demon and represents all characteristics shown by a dragon like shadowy planet Rahu. Vedic mythologists believe that Kethu represents tail of dragon snake. As per ancient Hindu mythologies, Kethu is a demon who became immortal during a war Samundra Mandhan (churning of Ocean by two opposing armies) between devil and deities for the purpose of getting Amrit (nectar).

Lord Vishnu, observing this war, came down in embodiment of Mohini-a wonderful angel to enchant asuras so that they can break their attentions from war for amrit. But one dragon among asuras was quite a witty demon, he understood the intentions of lord Vishnu and other devtas, and noiselessly tried to drink amrit.

But lord Vishnu caught him inhaling amrit and suddenly took out chakra (wheel-sized edge) to cut-off and depart his head from the body before the nectar could pass his throat. And, unfortunately that dragon was pieced in two parts-head and tail, head of the dragon was given a name "Rahu" and the other part was given a name "Ketu", and now they are immortal.

In Vedic Astrology, Kethu is said to be the south node of Moon or descending lunar node. Kethu does not own any zodiac sign but is conceived exalted in Scorpio and fallen in zodiac sign Taurus. Ketu is ever stronger planet than other planets whether it is aspected by a planet or conjoined with the planet.

Ketu indicates maternal grandfather. This node is also indicator of imprisonment. Ketu is indicator for all awry activities like magical power, fire or accidents, changing events, and broken relations. Fire, accidents or injury, renunciation, bad nature to have pleasure with other ladies, sour experience, salvation, punishment, imprisonment, fear complex and allergy are attributed to Ketu. It is very strong planet like Rahu when exalted.

Worse influence of Ketu can make one's character impious. Disappointment in life and untruthfulness are some characteristics due to influence of Rahu. This node can cause imprisonment. If one express feeling for enjoying life at other's spending like living in a rented home, using car offered by office or etc. are because of the attribution of Kethu like node Rahu. However, Kethu is influential in growing spiritual strength and makes one curious to have desire for more wise knowledge.

Indications of Ketu when occupying 12 houses

Kethu acts as a strong and influencing agent to the planet with which it is conjoined or exalted by a planet. Let's have a look what Ketu indicates when it occupies twelve houses in a horoscope.

Ketu in 1: Kethu in house 1 indicates bad health, short life, diseases, and marks in face. But if connected with benefics it gives a long life and richness.

Ketu in 2: Kethu in house 2 signifies over expenditures, no savings, tense about family, especially about children, unhealthy conditions, and dark complexion. Positive results of Ketu in house 2 make the person lucky.

Ketu in 3: If Kethu is visible in 3rd house in one's chart, it shows success in profession. The person can become more successful and rich if he goes in occupation like contractor, agriculturist.

Ketu in 4: Kethu in house 4 also indicates abundant money and ornaments but the person will have feelings of hate towards family members or may be inauspicious for mother and can marry two times.

Ketu in 5: Ketu in house 5 in a horoscope makes a person immoral or indecent. The person can become unfortunate for family especially for children and can face punishment given by Government. The person will also have fear or phobia from water.

Ketu in 6: Kethu in house 6 makes person courageous, studious, claver, and famous. But Moon in conjunction with Ketu in house 6 indicates loss.

Ketu in 7: Ketu in house 7 signify loss or death of first wife or second marriage. Second wife can also face chronic disease. Malefic effect of Ketu in house 7 unveils problems or dissatisfaction in marriage life or love life, and it makes the person cruel, he will also like sleeping always.

Ketu in 9: Ketu in house 9 affects the person to become unsympathetic, indecent, sweet speaker but ire from inside, cruel, angry, and influences him to take pleasure from backward or lower class women.

Ketu in 10: Ketu in house 10 in horoscope influence the person to enjoy company of widows. The person will leave in dirty places. Benefic influence makes the person honest or faithful.

Ketu in 11: Ketu in house 11 also denotes success, achievements, and abundant wealth like Rahu in the same house. The person gets admirable social image and aims to achieve mountainous deeds. Ketu in this house also indicates many children.

Summing up, Ketu is a malefic planet in one's horoscope but sometimes it also unearths benefic influence. Kethu in one's birth-chart mostly shows adverse affects. One's week mind, indecency and feelings of hate is often attached to influence of Ketu in one's horoscope.