Here, Astrosage brought you the date for Chaturmas in 2017. The period of Chaturmas commences on July 4 and continues till October 31. Read our article on Chaturmas and revive the glory of Lord Vishnu in his sleeping mode. 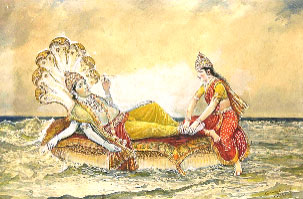 This period is between the months of July to October. The month of Sawan also comes during this period. This phase of the year is considered ideal for indulging in religious activities as it is said that the Gods are not happy during this time. Therefore, rituals are held to please them.

Chaturmas is the time devoted to austerities, therefore, people get engage in several cultural rituals, worshiping Lord Vishnu. Below are the dates for Chaturmas 2017. This is the period for devotees to offer their prayers, making sure the God and Goddesses are pleased. Hence, you should be aware of when to observe the period of Chaturmas in 2017.

The above mentioned dates will help you to observe fasting and other related rituals during the time of Chaturmas in 2017.

Now, it's our turn to know about the legends of Chaturmas and why it is to be celebrated.

Lord Vishnu is believed to be in a deep rest during this period. It is said that he goes to sleep on the day of Devshayani Ekadashi and wakes up on the day of Prabodhini Ekadashi. As per the Hindu Mythology, there is a story behind the concept of Chaturmas. In the story, Uttarayana is said to be the God of a day which represents six months and the other six months that come under Dakshinayana is like a single night for the Goddesses.

As there can be no celebrations during the night, therefore this period of six months was marked to be inauspicious by Lord Vishnu. This made Goddess of Dakshinayana angry and she threatened to kill herself. Seeing this, Lord Vishnu said that the first four months will be considered inauspicious. Hence, Chaturmas came into existence which begins with the Shayani Ekadashi.

Chaturmas : Significance Of Rituals During Chaturmas

Chaturmas is believed to be the period for penance when devotees are involved in rituals, chanting of Mantras, fasting, performing sacrifices and charity, bathing in holy waters to get rid of any wrongdoing in the past.

As the fast is devoted to Lord Vishnu, thereby reciting "Om Namo Bhagwate Vasudevaya Namah" and " Om Namo Narayana" gives relief from all pains and sufferings of the past. These rituals are performed throughout the Chaturmas, which ends with the Dev Uthani Ekadashi.

The Sanyasis or the spiritual seekers start their rituals on the first day of Chaturmas i.e. Shayani Ekadashi and continue it for four fortnights, which ends on full moon day of the month of Bhadrapada. They stay at one selected place and give discourses to the public.

Chaturmas : The Period Of Festivity

Let us look at the festivals which are celebrated in these months. Chaturmas is divided into four months which in the Hindu calendar are named as Shrawan or Sawan, Bhadrapad, Ashwina and Kartik.

Shrawan month holds special significance as it is dedicated to Lord Shiva and has several auspicious days and festivals like Nag Panchami, Kamika Ekadashi, Narali Purnima and Haryali Teej. People engage themselves in Rudra Pujas, Yagnas and fasting for worshipping Shiva Lingam on Mondays.

Bhadrapad is the month where it's first half is dedicated to Lord Ganapati, as the festival of Ganesh Chaturthi is celebrated during this time. People worship the idol of lord Ganesh for nine days and on the tenth day it is immersed in the water. The festivals like Janamashtami and Raksha Bandhan are also celebrated in this month.

During the months of Ashwin and Kartik, there are festivals like Navratri, Durga Puja and Dussehra

It is also said that the Hindu God and Goddesses are in deep rest during this time and should not be disturbed, therefore, certain auspicious ceremonies such as marriage, thread ceremonies are not be proceeded in Chaturmas.

Chaturmas is the time when people should also maintain self control when it comes to their eating habits and should fast for sometime, as it is considered very sacred.

There is also a scientific reason behind Chaturmas, due to the monsoon it is required that we do not eat much of the outside food as it prevents illness. It is also prefered that people restrain from doing anything wrong or hurting anyone's sentiments by the usage of bad words.

In Jainism, Chaturmas is also called Varsha Yog. It is believed that the monks used to settle at one place during this time as they didn't want to cause any damage to the creatures like insects which are produced massively in the rainy season.

These monks who generally wander to places, usually spend the period between Shayani Ekadashi and Prabodhini Ekadashi at a selected place as their annual 'Rains Retreat'. They occupy themselves by fasting, meditating and providing religious discourses to the local public.

Chaturmas is very significant as one of the most important Jain festivals, Paryushan, is celebrated during this period, which ends with 'forgiveness day' also known as Kshamavani Diwas, where people and disciples say Micchami Dukkadam and ask forgiveness from each other.

It is said that Gautam Buddha had stayed at the royal garden of King Bimbisara where later, sermons were conducted in the period of Chaturmas. This practice is followed by monks, till date.

We hope that the information provided to you for Chaturmas proves to be useful for performing the required rituals, accordingly. We also wish that you are able to succeed in fasting by following the rules mentioned and restraining from anything that might hurt and cause pain to anyone during Chaturmas. The period from Shayani Ekadashi to Prabodhini Ekadashi is to be observed with kindness and purity of heart.

AstroSage wishes you all a blissful period during Chaturmas..!