Planet Moon in Astrology plays a pivotal and prominent role in Vedic Astrology and Hinduism. Astronomically, Moon is not a planet, however, it is considered as one in Vedic Astrology. It is the second luminary after Sun. It is the nearest satellite of mother planet Earth and completes its one rotation within 28 days approx. It is the only planet revolving around Earth. If Sun is a generator of power, Moon will be the conductor of the same power. One half portion of Moon receives light from Sun and gets illuminated at one time. By and large, Moon shines through the reflected light of Sun. 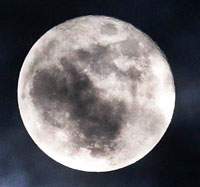 It is said that Chandra has emerged from the sea of milk at the time of sea churning by Asuras and Devas. He was considered as planet due to its brilliant form and also one of the Navagrahas. It is considered as one of Devas. He is weak minded and married to Tara. The child born out of their relationship is Buddha (Mercury), who started hating his father as his birth was the result of a deadly sin. In Vedic Astrology, Mercury and Moon are considered as rival planets.

Later, it is said that Chandra married 27 daughters of Daksha, the Prajapati. There was one condition imposed by their father, which was that Chandra must not favour anyone out of 27 and should love all of them equally. However, Chandra failed to keep his promise. He was fond of Rohini a lot. As a result, Daksha got angry and cursed Moon to lose his divine lustre. After many penances, Chandra was able to regain some of his lustre. The cycle of regaining and losing his lustre is reflected as phases of Moon. Later on, this phenomenon is known as waxing and waning of Moon.

In Hindu Mythology, it is believed that Moon loved Rohini the most, which is the reason it gets exalted in Taurus specially during Rohini nakshatra.

As per the Markandeya Purana, Chandra is born as the son of sage Atri and his wife Anasuya due to the divine grace of Brahma. According to this, Lord Brahma's power entered Atri and Chandrato was born.

Moon is nocturnal, cold, changeable, moist, receptive and feminine planet. The fourth sign of Zodiac "Cancer" is ruled by the planet Moon. Moon moves daily around 13 degrees on an average and whenever it passes through Taurus sign, it would be at its maximum strength at 3 degrees. It gets debilitated and weak while transiting through Scorpio. The effect of Moon depends on the sign in which it sits, aspects which it receives and association with other planet.

What does Moon signify in Vedic Astrology?

Moon represents the "Mother" in native's birth chart. It indicates that the person will love his own country. It is also considered as a home due to ownership of fourth house in astrology. It represents the mind of a person, local government or private jobs. As Sun indicates native's public life and holding high position in the society, Moon shows the family life, home and personal and private affairs.

Physical appearance: People born under the strong influence of this planet have charm on their face. They are born under Cancer Lagna or on Mondays. Moon represents mind and liquid in your body and hence Cancer sign indicates mind in natural Kaal Purush Kundali.

If Moon is placed positively in your birth chart, then it will bless you with a pleasant and charming personality. It will become very beneficial for you. It provides you emotions and positive attitude towards everything and everybody. You will have good intuitive power and inspiration. Let's see below how Moon confers good, medium and bad results:

What are the professions generally denoted by planet Moon?

Being a watery planet, native may be employed in shipping department, navy, as a water analyst or in a water supply department. His profession might be related to salt, fish, corals, pearls, flowers, liquids, perfumes, kerosene, milk, etc. Vegetables, Farmers, fruit growers and suppliers or dealers in such commodities are governed by Moon. Nurses, cooks, stall managers, launderers are ruled by Moon. One may be a Mechanical Engineer in water-works, or if Moon were to be in movable or common sign, he might be a captain on a steamer or ship.

Professional streams also depend on the PAC (Position-Aspect-Conjunction) connection with other influencing planets. In short, we can say that the nature of Planet Moon in profession or career varies with the combination of Moon with other planets. Here, we have listed below few professional fields for your better understanding:

The day governed by Moon is "Monday", one may expect better results on this day itself if he is running with the Mahadasha of "Moon". Moon rules over "Cancer" zodiac sign and gets exalted in "Taurus". The precious gemstone for planet Moon is "Pushparagam Diamond" and "All White Stone (Pearl)".

Hence planet Moon is very prominent in terms of Astrology as well as Astronomy. The life exists due to water on earth and the main karak for water is Moon. It gives emotions to people and important for everything and everyone for survival.

Moon in various houses according to Vedic Astrology

Moon in various zodiac signs according to Vedic Astrology

Moon in various houses according to Lal Kitab