Influence of the Planet Sun in Horoscopes and Astrology 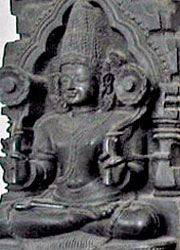 A gigantic source of light vanishes the entire darkness of earth when it slowly-slowly rises in the early morning, in the surroundings of chilly blow of wind, in a melodious chirping of birds, is none other than the almighty orange 'SUN'. Undeniably, Sun is the symbol of peace, wisdom and spirit in our lives. We acknowledge Sun as the 'evident Lord' on the earth. Many of us get up early every morning and practice 'Surya Namaskar' to get enormous energy and lost vitality ,from this Lord. He is the lord of the day 'Sunday' and represents special numbers 1 and 4. The Sun takes exactly one year to go round the ecliptic.

Acknowledgments of Sun in the Universe
In our galaxy Milky Way (Akash Ganga), Sun is acknowledged as 'one of the largest planets', and 'king of the planets'. It is approximately 93 millions miles away from earth, which is a round - shaped, heavy-elemental star that spreads massive heat around other planets and stars. It contains more than 99 percent of the total mass of the solar system. Sun is a dry, masculine, positive and hot planet in Universe.

'Sun'- Lord of Hindus
Religious people of India, especially Hindus, identify Sun as 'a lord with supreme light' and an important deity 'Surya Narayan' for all their auspicious rituals. They also portray the Sun as a lord that has hair and arms of gold, and seven horses or one horse with seven heads is the ride of lord Sun. Hindu people also enunciate lord Sun with other names as Bhaskar, Surya, Ark, Arun, Bhanu, Dinakar, Ravi, Dhinakar or Dhinakrit, Thanpna and Pusha. In every 'Makar Sankranti', people pray to lord Surya and give a lot of prestige to him. Astrologers believe that this special occasion comes when the Sun shows its transition from Dhanu Rashi (Sagittarius sign) to Makar Rashi (Capricorn sign), and this festival comes every January 14. Further, 'Sunday' is the day devoted for venerable lord Surya. In fact, many of ladies keep fasting to delight lord Surya on every Sunday for the goodwill of their family.

'Sun'-Prominent Planet in Astrology
Being the leading planet in solar system 'Sun' influence all other planets, stars and zodiac signs to give some astrological meaning to our lives. Planet Sun is the ruler of zodiac sign Leo. So, those who born under zodiac sign Leo or born on Sundays obtain benedictions of venerable star Sun; they possess impressive personality, marvelous characteristics and majestic behavior in their lives if they have beneficial Sun.

Impact of beneficial and afflicted Sun in one's characteristics Amongst the twelve zodiac signs Sun governs the zodiac sign Leo, so people with Sun as ruling planet born either on a Sunday or in Leo sign or with sun in the Ascendant will have special characteristics. It bestows true love towards everything and everybody. Strong-will, individuality, royalty, magnetic nature, boldness, brilliance, energy, dignity, Kind-heart, optimism, Kingly, well-reputation, and ambitious are some key qualities due to 'beneficial Sun'. On the other hand, 'afflicted Sun' makes one bluff, angry, arrogant, jealous, lavish, over ambitious, irritable, and egoistical. The Sun is reckoned 'afflicted' when it is unfavorable debilitated or take an appropriate house placement in one's natal- chart. In one's birth-chart, it generally encompasses Squares, Quincunxes, oppositions and Conjunctions. Heavy affliction of Sun in one's natal-chart sometimes gives lots of psychological problems. Whereas, if it shows in one's natal-chart that the Sun conjunct the Ascendant, the person will be recognized as a 'highly-confident' person. People born with Sun square Ascendant do not like to come across before masses, and often they are known as a person with 'attitude'.

Planetary movement of Sun in one's life
House placement Sun in one's zodiac signs and combination of Sun with other planets shapes many important things in our life. Sun is represented as a luminary star because of its immense emission of light. Whenever Sun enters in a significant zodiac sign and in planets of solar system, it expresses a noteworthy gist in one's life. Sun offers us the power of resistance and vitality. Sun also governs the breath of our lives, and rules over our consciousness and denotes ones individuality. Different planetary positions of Sun in different houses also reveal 'good' or 'bad' effect in one's health, wealth, career and life. Sun makes a particular house placement in our birth-chart that molds major aspects of life like health, profession, private and family life. For instance, nature of one's profession is mainly because of the combination of Sun with other planet. For example, the native will get definite success being employed with government textile department if Sun shows its connected with moon and mercury in the Ascendant. Sun with Jupiter produces a good career as a physician. Sun enters and leaves zodiac sign once in a year that becomes 'sun sign' of the person. For example, according to Vedic astrology, Sun enters in sign Aries every April 14 and leaves zodiac sign Aries every May 15. So, this period shows some special influence of Sun in this particular zodiac sign.

There are twelve houses of horoscope; association of Sun in any house illuminates some meaning of that house in one's life. For example, Sun in the first house in your natal-chart, shows individuality, self-confidence and dignity. In second house, it signifies strong energy to make money. In the third house, it expands your understanding level, and makes you talented. If the Sun is placed in the 4th house in your Ascendant, it shows that your family-oriented person. In the similar way, house placement of Sun from 1 to 12 in Ascendant shows some meaning in your life.

Concluding here , Sun is the center of all life, force and energy and the giver of Prana. Offering prayer to lord Sun every morning, especially on Sundays, will endow you mammoth energy, freshness and ecstasy for sure. People with Sun as ruling planet born either on a Sunday or in Leo sign or with sun in the Ascendant will certainly consider about Sun in their lives. If your facing any deep problem due to afflicted Sun, you can acquire remedies suggested by knowledgeable astrologers like AstroSage panel of astrologers to make your life free from troubles.