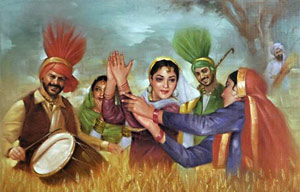 Baisakhi is known to be a harvest festival. On this day, farmers pay a tribute to God for good harvest in their fields. It is also celebrated as Sikhs New Year in accordance with Hindu Solar Calendar. In 2017, it will be celebrated on 14th of April. Basically, this occasion is celebrated by the people of Punjab with great enthusiasm and gusto. Read on to know more..

Importance of Baisakhi in Sikhism

Festival of Baisakhi is celebrated because on the same day in the year 1699 Guru Gobind Singh incepted the Panth Khalsa, which is the 'Order of Pure Ones'. Vaisakhi is also celebrated as Thanksgiving Day by the farmers. On this day, farmers thank to God and pray for the abundant harvest and prosperity. Baisakhi is the festival which belongs to the people of all religions and celebrated by them with great fervor.

Baisakhi is usually celebrated on 13th of April and occasionally on 14th of April. Since last eleven years, a special event of Surrey Vaisakhi Parade is organized in the streets of the community. This parade is not bound and opens for everyone regardless caste, race or religion. Surrey Vaisakhi Parade is held by many community members and features a huge number of floats with live music. As this festival also signifies the beginning of the harvest festival, all the attendees of Surrey Vaisakhi Parade are served with free food and drinks during the event.
Since years, this festival is being celebrated by the people singing, dancing, dressing in holiday finery, enjoying parades and celebrating wrestling bouts. Men perform Bhangra dance form and women perform Gidda. People enjoy delicious treats and special sweet known as 'Kada Prasad'. This festival holds a very special significance. Many people choose to get baptized on this day only. The most common event of this festival that is being organized since years is 'Nagar Kirtan', where people make their way along the streets singing the hymns from the holy book 'Guru Granth Sahib'.

The festival holds special significance to Sikhs. Many Sikhs choose to be baptized during this holiday. During the Vaisakhi celebration, processions called Nagar Kirtan also make their way along the streets singing hymns from a sacred book of worship known as Guru Granth Sahib.

While celebrating Vaisakhi, we should also know the legend behind it. During the times of 1650s, India was suffering through turmoil, especially in the regions of Punjab. At that time, rulers became corrupt, all laws were broken, rights of common man did not exist and there was no space for justice left. Powerful people imposed their will and nobody was allowed to question their decisions. Misery was prevailing everywhere and people under weaker section suffered a lot. Understanding the need of time, Guru Gobind Singh emerged himself as the savior and decided to establish Khalsa. He then thought of finding the people within the community who would take the responsibility of uplifting humanity without fear. He wanted someone who would be even handed as well as fair all times and would die for the protection of truth. So, he called upon a meeting calling Sikhs from all parts of the country. He then announced his demand for the one who would give his life in the name of truth and justice.

After asking many times, a man stood up. He then took him in a tent stood behind him. When he came out, his sword was red with blood. Further he called for four more men and each time he came out with the blooded sword. But, when the last and fifth man entered, he didn't come out alone with the red sword, he came along all five men. Then he named them as 'Panj Pyare' and baptized them with the holy water. He made the holy water using his sword and his wife added sugar crystals (Patashas) to it. He also asked Panj Pyare to baptize him as well.

Further, he claimed that these Panj Pyare will be the embodiment of the Guru himself and stated "Where there are Panj Pyare, there I am. When these five meet, they become the holiest of the holy."

Hence, Panj Pyare were the first five members of Khalsa.

This was all on Baisakhi. With this, we hope that you must have got an idea of this beautiful festival and will celebrate it to the best to make it more beautiful. Spread this article within your near dear ones and make the celebration of Baisakhi a grand festival. We hope you get the blessings of the holy Guru Gobind Singh and succeed in all spheres of life. Happy Baisakhi!