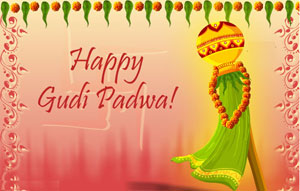 Gudi Padwa is celebrated as Marathi New Year. According to lunisolar Hindu Calendar, it is celebrated on the 1st day of Chaitra. It will held on 28 March 2017. This is mainly celebrated in Maharashtra, Goa and in some parts of Karnataka. In Karnataka, this festival is known as Ugadi. This occasion is considered to be the harvest festival visualising the end of Rabi crops. It is the time when the riped mangoes will be seen in the market. Read on to know more about this festival.

While celebrating Gudi Padwa, it's a good idea to know about its significance. Gudi Padwa commemorates many legendary events. One legend signifies the defeat of Shakas by Shaliavahan. Some people commemorate the victory of Chhatrapati Shivaji on this day.

Prasad is the most important thing that follows almost all Hindu festivals. Hence, Gudi Padwa also has this ritual. On the day of Gudi Padwa, offerings (Prasadam) are made of Neem leaves, Neem flowers and jaggery. These offerings are distributed among all the people. Further, at times, offerings are also consisted of soaked dal, cumin seeds, honey and asafetida. As the offering is consisted of bitter, sweet as well as spicy flavor signifies the meaning of life. Hence, life is the blend of joys, sorrows and adventure.

Gudi Padwa is considered as the most auspicious day of the entire Marathi year. In Maharashtra, people try to begin all their important tasks, ventures and investments from this day only. Also, this day heralds the arrival of the King of Seasons, spring.

On the other hand, farmers plough their fields on this day, as they believe it will bring a good harvest in future.

Villagers clean their houses and plaster the courtyards with cow dung on the day of Gudi Padwa. In cities, people do normal cleaning of houses. Women and children decorate the entire area with beautiful Rangolis especially at doorsteps. Everyone wears new clothes as it is a time of gathering.

Gudi Padwa is a traditional way of partying. The celebration begins after eating the bitter sweet leaves of Neem. Apart from the above mentioned Prasadam, people also make various types of delicious dishes. Some of them are Poori or Puran Poli with Shrikhand. Konkani people prepare Kanangachi Kheer (porridge). Various types of porridges (Kheer) are prepared using sweet potato, coconut milk, jaggery and rice flour, to name a few.

According to Brahma Purana, it is believed that Lord Brahma created the entire Universe on this day after deluge. The time also started ticking from this day only.

Undoubtedly, Gudi Padwa is an awesome festival. One should never miss the chance of becoming a part of it. With this brief article on Gudi Padwa 2017, we hope you will make the best out of this festival. Happy Gudi Padwa 2017!