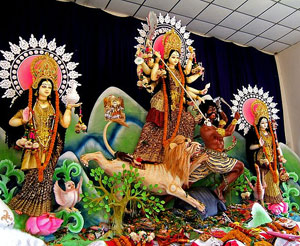 Durga Puja in 2017 is going to be celebrated from September 26 to September 30. Find the table of Durga Puja 2017 schedule below -

Durga Puja is the festival of commemorating Goddess Durga, also known as Durgotsav and Sharadotsav. It is a six day festival and each day has its own importance. Dates of Durga Pooja are decided from the Hindu traditional lunar calendar. The fortnights of the festival are known as Devi Paksha or Fortnight of the Goddess. Mahalaya precedes the Devi Paksha as it is the immediate day after the fortnight of forefathers (Pitra Paksha). Further, Devi Paksha ends on Kojagori full Moon night. This day is known as Kojagori Lokkhi Puja and Goddess Lakshmi is worshipped on this day.

Basically, this day is celebrated to honor the victory of Goddess Durga over Mahishasura. Durga Puja basically signifies the victory of good over evil.

Durga Puja is going to be celebrated with great zeal. Festival of Durga Puja has special significance in some parts of India, namely West Bengal, Assam, Jharkhand, Bihar, Tripura and Orissa. These states officially go on a five day holiday during the festival. Durga Puja is mainly considered as the Bengali festival and as West Bengal and Tripura has biggest majority of Bengalis, it becomes the grandest festival of the year.

Apart from the above mentioned states, festival of Durga Puja is celebrated all around India and world with great zeal and gusto. Wherever Bengalis go, they always plan an event at the time of Durga Puja. Hence, this festival has become important part of everyone's life. Even in Bangladesh there is a 3 day holiday at the time of this festival, as 20% of their population is of Hindus and all the people celebrate Durga Puja with great fun. Durga Puja is now celebrated in various parts of the world and organized on a very large scale. It is said that Durga Puja's prominence boosted up during British rule in Bengal.

Festival of Durga Puja includes commemoration of Lord Shiva and Goddess Lakshmi as well as Saraswati with Lord Ganesha and Kartikeya. Lord Shiva is considered as the consort of Goddess and all other forms of God are considered as her children. Mother Nature is also worshipped at the time of Durga Puja. Kala Bou (nine plants) and banana tree signifies the nine divine forms of Goddess Durga.

To celebrate Durga Puja, one should also know how to worship Goddess during Durga Puja. According to Hindu scriptures, Mantras chanted at the time of Navratri put special impact on one's life. On the other hand, if the mantras are particularly dedicated to Goddess Durga directly or indirectly, the effect multiplies to double. Hence, here we are offering you certain mantras to enchant Goddess Durga and fetch her blessings.

Mantras are chanted in a devotional ambience. Light some incense, offer some flowers to the Goddess and keep some water in a small bowl or any utensil. Apart from this, burn Dhoona with Loban to purify the environment. Now, we will know what to chant during Durga Puja.

You may also worship in Durga Puja according to your zodiac sign. Find your best suited way of Puja here - Durga Puja According to Zodiac.

This mantra should be first mantra of Puja and chanted while offering flowers to the Goddess.

Further, here is the Durga Shloka, which enchants Goddess Durga.

These are the basic mantra. Apart from these, there are various other mantras, but they should be chanted only after consulting to a Sadhak otherwise a small mistake in the process of worship might make you the utensil of Goddess's wrath.

This was all general about Durga Puja. Hope you would make this Durga Puja more happening and fetch the immense blessings of Goddess Durga.

Stay connected with Maa Durga by keeping her in front of your eyes all the time. Apply Durga Puja Wallpapers to your gadgets and become her favorite devotee. Exchange the blessing and wishes of Maa Durga with your loved one by sharing Durga Puja Greetings.