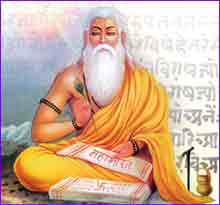 Guru Purnima 2017 date is 9 July, Sunday. Every year, Guru Purnima is celebrated on the full Moon day in the Hindu month of Ashadha, which corresponds with the Gregorian month July.

What is Guru Purnima?

Let us first understand the significance of Guru Purnima while celebrating this great festival. In Indian culture, Gurus are considered as the people of highest priority in one's life. Hindus initiate everything with blessings of their Guru (mentor). Relation of a mentor (Guru) and disciple is of great importance in India. That is why, day of Guru Purnima is exclusively dedicated to the pay gratitude toward the mentors and teachers by disciples. Everybody has mentors in life and the life of a person is incomplete without a teacher and a mentor.

'Guru' is a Sanskrit word, which literally means the dispeller of darkness. Word Guru is formed conjoining two syllables 'Gu' and 'Ru'. 'Gu' means darkness or useless stuff and 'Ru' means remover. Therefore, Guru is someone who takes his disciples from the darkness of lies to the light of truth and enlightenment.

Day of Guru Purnima is also known as Guru Charan Puja day. There is a famous prose in India from Skanda Purana Guru Gita -

In English, it means - Guru is Brahma, Vishnu and Shiva. He is the personification of supreme power. Hence, we venerate him with great honor.

Before honoring and accepting one as Guru we need to be very cautious too because a wrong Guru can ruin your life.

Ramakrishna Paramhansa has described the glory of guru like this - Bees get attracted toward a full blown flower when breeze spreads its fragrance all around. Ants also reach the places where sweets are kept. Nobody has to invite the bees or ants. Similarly, when a person is pure, his sweetness wafts in the environment and everybody can feel it. Hence, everybody approaches him naturally to seek the truth of his character. Such a person needs not to approach people, as everybody is already keen to hear him.

One cannot define a Guru from his look, as ancient Gurus used to clad themselves in saffrons or whites. A Guru can be anyone, a book, a child, an incident or anything that teaches you something. You can consider a person as a personified form of Guru but it is not always important.

While celebrating Guru Purnima, It is a good idea to know about the legend related to it. The pious day of Guru Purnima is mainly dedicated to a great Hindu sage, Guru Vyasa who is the author of the epic Mahabharata. Guru Vyasa is considered as the Guru of all Gurus. The day of Guru Purnima is celebrated to commemorate the birthday of Guru Vyasa. On this day, Vyasa was born to the sage Parashara and a fisherwoman Satyavati. Due to this, Guru Purnima is also known as Vyasa Purnima. He is considered as the Guru of all Gurus for his unforgettable service to humanity in the form of his compositions. Also, he is the editor of all Hindu Vedas. He is the one who divided these pious Hindu scriptures in four different parts - Rig Veda, Sama Veda, Yajur Veda and Atharva Veda. Apart from this, he is also the author of 18 Purana and Bhagavad Gita. Not only this, he is the composer of Vyasa Samhita and Upapuranas as well. Also, he composed the authentic thesis of Brahma Sutras and explained the background of Vedas. Therefore, on this day, students of Vedas express their gratitude toward the great sage Veda Vyasa.

Guru Vyasa has explained all the secrets that lead to happy and peaceful life in his compositions. All we need is the patience and time to understand the unparalleled wisdom collected in the Holy Scriptures of Hindus.

Veda Vyasa gave a special contribution to the Sanatan Dharma. Special Pujas are performed on this day in commemoration of Guru, Vyasa Ji and his birthday.

Guru Purnima has a very special significance. Celebrating Guru Purnima also enchants Almighty and helps us fetching his blessings. With this, we hope you will make the best out of this day. Happy Guru Purnima..!