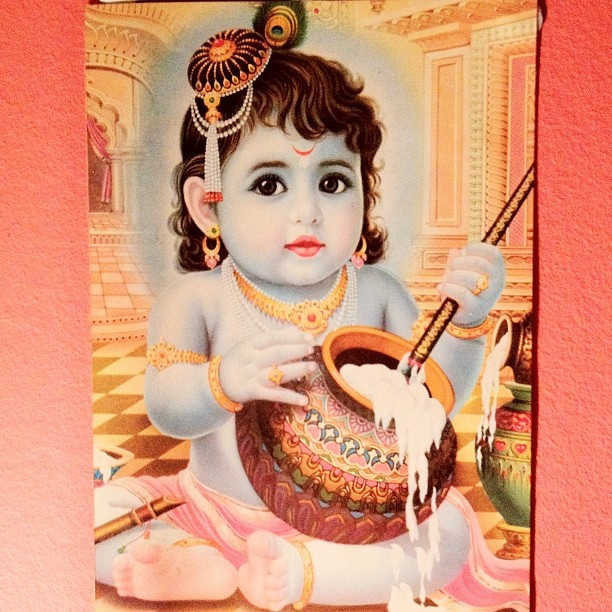 Krishnashtami, also known as Janmashtami, will be observed on 14th August in 2017. Lord Krishna wa the 8th incarnation of Lord Vishnu. In the Hindu month of Bhadrapada, it is celebrated on its 8th day in Krishna paksha. It is observed all over the country. It is also known as Krishnashtami, Saatam Aatham, Gokulashtami, Ashtami Rohini, Srikrishna Jayanti, Sree Jayanti. Read on to know more...

A special mention has already been given to the celebration of Janmashtami in Mathura and Vrindavan. These two places in India are very famous for their cultural events and traditions that are followed for Janmashtami. Acts are done in which skilled artists enact the roles of Lord Krishna, Radha and Gopis. The act recreates the flirtatious life of Lord Krishna and special incidents are also narrated related to his life. The dahi handi festival celebrates the naughty side of Lord Krishna. In dahi handi, young men form pyramids and competitions are held as who will from the highest pyramid and who will first reach and break the hanging pots filled with butter. This is a major event in Mathura, Vrindavan as well as Mumbai.

Legend Behind Janmashtami : The Prophecy And King Kansa

One should know about the legend behind this festival while celebrating Janmashtami. Lord Krishna was the eighth son of vasudeva and devaki. Based on the scriptures details and astrological predictions, the birthday of Lord Krishna is known as Janmashtami. Devaki was the princess of Mathura and vasudeva was her husband. The brother of Devaki, Kansa, ascended the throne of Mathura by imprisoning his father, King Agrasen. A prophecy was made that Kansa, the King of Mathura, will be killed by the hands of Devaki's eighth son. To stay safe, kansa had imprisoned his sister Devaki as well as her husband Vasudeva. Kansa had killed the six children that were given birth by Devaki. The seventh son was said to be a miscarriage. However, he was secretly transferred by Vasudev to some other place. The seventh son was Balarama, elder to Lord Krishna.

Then Lord Krishna was born. Vasudev knew that the life of his son is in danger. To protect him, he secretly took his son out of the prison. He was then raised by his foster parents, Yasoda and Nanda, in Gokul. Along with Lord Krishna, two other children of Devaki and Vasudev survived. One was Balaram who was secretly taken to another place and second was subhadra, born much after Balaram and Krishna.

The festival of Krishna janmashtami is going to be celebrated with great joy by Hindus. People fast for the whole day and stay awake till the midnight, a time when Lord Krishna was supposed to be born. The images of Krishna's childhood and infancy are bought. The temples are beautifully decorated. The temples at home are cleaned and decorated with colored papers and other items of decoration such as flowers. A cradle for Lord Krishna is also brought and kept in the temple. At midnight, the devotees gather at one place and sing devotional songs, dance and exchange gifts with each other. Various kinds of sweet dishes are prepared. Some temples also conduct a special event to hear the chapters of Bhagvad Gita.

People pray to Lord Krishna with pure heart and devotion and seek his blessings. The festival is celebrated with great enthusiasm throughout the country. Moreover, it is also celebrated in Bangladesh and Nepal, wherever Hindus reside. You can wish your loved ones Janmashtami by sending beautiful Janmashtami SMS.

Lord Krishna has a special image of his own in the minds of his devotees. He is seen as the naughtiest Lord of all time who is also very flirtatious. The love of Lord Krishna and Radha is not unknown to anyone. The Ras Leela is a magnificent example of his flirtatious and mischievous character. Lord Krishna was too naughty in his childhood and stories of his childhood are also very interesting.