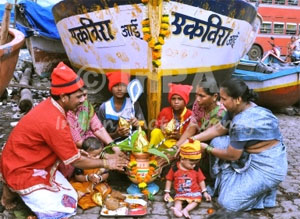 Narali Purnima is a festival celebrated by the fishing folk, those who are involved in fishing, salt production and anything related to sea. Narali Purnima festival is celebrated to mark the end of monsoon season and the beginning of fishing season. Prayers are offered to Varuna Deva to seek his blessings for a good fishing season and to protect them from any mishap while in the sea.

Narali Purnima in 2015, like every year, will be celebrated with great joy. Narali Purnima or Narial Purnima is celebrated by the fishing community. Narial (naral in Marathi) which means coconuts, are offered to the sea god Varuna, to seek his blessings for a fruitful fishing season, hence the name Narali Purnima comes into the picture. It is believed that an offering of gold coconut to the sea will bring in a lot of luck but since it is a very costly affair many do not follow it.

The rituals performed on this day are very auspicious. The "Yagyopaweet" and "Upnayan" rituals are the most widely followed among all the rituals. "Shudikaran" ritual is performed by Brahmins on this day. The festival of Raksha bandhan is also celebrated on this day. In some parts of the India the ritual of replacing "Yagnopavit" or sacred threads with new ones is carried out.

The month of Shravan is considered very sacred and auspicious for the very reason that, it is filled with festivals. Narali Purnima is one of the festivals celebrated in this month. Shravan month is mainly dedicated to the worship of Lord Shiva. Entire month is filled with special puja's and aarti's in temples. Shravan Somvar Vrats are one of the most important ritual observed by many during this month. Women observe fast and offer prayers to Goddess Parvati on Mangal Gowri Vrats which is observed on Tuesdays. Devotees offer prayers to Lord Shiva and seek his blessings in this holy month of Shravan. Shravan month is also considered as the mating period of fishes. Hence, fishing is not done during this period. They allow the fishes to mate properly so that their population increase and thus continue to provide with healthy livelihood for the fisherfolk. Celebration of Narali Purnima marks the end of Shravan and the beginning of the fishing season.

On Narali Purnima, the sea god Varuna is worshipped by the fishermen as their livelihood depends on the sea. Singing and dancing is the main attractions of this festival. Sweet coconut rice is prepared for the day and offered to the sea along with the coconuts. After offering the coconuts to the sea, the fishermen decorate their boats with colorful artifacts, flags, paint their boats new and head out to sea after a halt given in the rainy season. If the sea is not nearby, then people go to nearby lakes, ponds or tanks and offer coconuts. Narali Purnima, Shravani Purnima, Rakhi Purnima or Raksha Bandhan circle around the same time.

Narali Purnima: The Significance of Coconut

To conclude we can say that Narali Purnima is celebrated with much mirth and ardor.