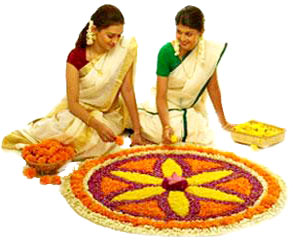 Onam in 2017 will be celebrated on 4th of September, Monday. Festival of Onam is basically celebrated by the people of Kerala in India. Though it is a regional festival of Kerala, but its glory is spread all around the world. According to the lunar calendar, followed by Hindus, Onam falls in the month of Chingam (August - September). It is not a one day fest but lasts for 10 days. Festival of Onam includes flower carpets (Pookalam), elaborated banquet lunches (Sadhya), snake boat races, Puli Kali, Onappottan, Kaazhchakkula in Guruvayoor, Kummatti Kali, Kaikottikali, Onathaar, Onathallu, Anachamayam, Thumbi Thullal, Thrikkakara Appan, Onavillu and many more. Amongst all the events of Onam's ten day festival, these were few of them. Now, let's know more on Onam.

Onam is one of the most ancient festivals of India which is still surviving in this modernized world. Onam is basically Kerala's rice harvest and rain flowers festival. It is celebrated to commemorate the Asura King Mahabali's annual visit from the underworld (Patala) to his kingdom.

While celebrating Onam, we should also know the legend behind Onam festival. The legend says that Kerala lived its golden era under the rule of King Mahabali. According to the description in Vaivarta Purana, Lord Vishnu wanted to break the pride of Lord Indra. That is why, he made Mahabali more powerful. There is a statement in Bhagavata Purana, "Lord Vishnu will take away the Kingdom of Purandara (Lord Indra) and handover to Bali Maharaj."

Kingdom under the rule of Mahabali became so prosperous and happy that even Gods under Lord Indra became jealous of him. This whole process was intended by Lord Vishnu. Further, the Gods with Lord Indra approached Lord Vishnu claiming the Mahabali has become equivalent to Lord Indra in power. Finally, Lord Vishnu assured that the pride of Lord Indra has come to its level and the universe is becoming imbalanced in the existence of two Indras, he incarnated himself as a dwarf and named himself 'Vamana'.

Vamana requested Mahabali to give him his three steps of land to live in. In spite of getting warned by Guru Shukracharya, Mahabali promised him to offer three steps of land. Vamana further enlarged himself to such dimensions that he was enough to cover all three worlds. He became so huge that he easily stepped from heaven to Earth and then Earth to netherworld, but his last step left and there was no space left for his third step. Being unable of fulfilling the demands of Vanara, Mahabali offered his head for Lord Vishnu's third step. Hence, Vamana placed his third step over the head of Mahabali and pushed him down to the netherworld. Being worshipped by Mahabali and his ancestor Bhakt Prahalad, Lord Vishnu blessed him with the sovereignty of Patala (netherworld).

As Mahabali was equivalent to Indra, he had to wait for the next Yuga to become the Indra. However, by the grace of Lord Vishnu, he got a boon of seeing the people of his kingdom once in a year. Hence, on the day of Onam, Mahabali visits his state and people every year. That is why people arrange for a grand festival in honor of their king and portrays that they are well as well as wish for his wellness.

Onam is going to be celebrated with great zeal in Kerala and some other parts of India. Kerala and its rich heritage come out in the best form during Onam. The main feature of this festival is the grand feast known as Onam Sadya, which is prepared on Thiruvonam. This is basically a 9 course feast consisting of 11 to 13 important dishes.

There is a proper method of having this meal. The meal is served on banana leaves and the people sit on a mat laid on floor to consume the delicious meal.

Another important part of Onam is Vallamkali, the snake boat race, which takes place at Pamba River. Undoubtedly, Vallamkali is the most awaited event of this 10 day festival. Vallamkali is followed by a huge mass of people. Hundreds of boatmen oar the boats while chanting cultural songs and viewers cheer on them.

Festival of Onam consists of many types of games, which are named as Onakalikal. Men go for some tough sports like Talappanthukali (played using ball), Kutukutu, Ambeyyal (Archery) and combats called Kayyankali and Attakalam, to name a few. Women go for cultural activities, like making Pookalam on floors (flower mat) in front of the houses to welcome Mahabali. Some dances like Kaikottikali and Thumbi Thullal are also performed by women during the time of Onam. Some folk performances like Kummatti Kali and Pulikali add flavor to the celebration.

This was a brief article on the festival of Onam. Stay tuned to AstroSage, and keep suggesting if you wish to know more. With this article on Onam, we wish you get the enormous wishes and blessings of Lord Vishnu and Lord of Netherworld (Mahabali).

Want to send your wishes and blessings to your loved ones? Send them - Onam Greeting Cards or Onam SMS. Happy Onam..!