Sun is the star of our solar system, but in astrology, it is considered as a planet. The transit of Sun will also affect the life of the people. Want to know about the Sun transit dates in 2014? Read this article to know more about Sun Transit in 2014 and the astrological significance of planet Sun. 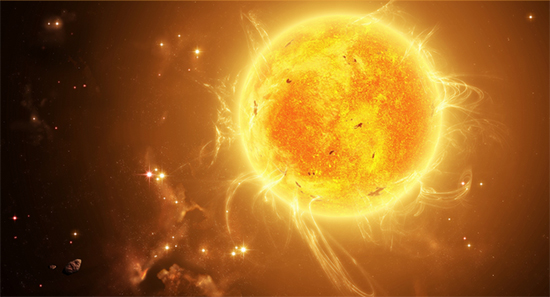 Like all the other astrological planets, Sun will also transit in the year 2014. This Sun transit in 2014 will also bring some considerable changes in everyone's life. Sun transit in 2014 can put both favorable and unfavorable effects on your zodiac. As Sun is the eldest of all the other planets, Sun transit 2014 will give more effects than any other planet on your zodiac sign. Sun depicts our body's constitution and the life force. So, the Surya Gochar 2014 (Sun Transit 2014) may affect your body in either good or bad way. The followers of astrology are always keen to know about the transit of Sun, as it is the supreme power of all the planets. It is said to be the source of energy. That is why the dates of Sun transit in 2014 are very important to know.

In the beginning of the year 2014, Sun will be in Sagittarius sign. Transitions after that are mentioned below:

So, this was all about the transits of Sun in the year 2014. Let's get to know more about the Sun.

Sun is the central star of our solar system, which is the source of energy and light to all the other planets. Sun is very important for Earth, as it nurtures our nature and provides us light. Although, astronomically, Sun is a star, but its position also changes when Earth revolves around it and rotates on its own orbit too. That is why the dates of Sun transit are same in most of the years. The changing position of the Sun according to the Earth affects the zodiac signs like all the other transits.

According to the Hindu mythology, Sun is called Surya. He is said to be the chief of all the Navagraha (nine planets). Sun is considered as the supreme deity and worshipped by all Hindus. He is the lord of Raviwar (Sunday), as Ravi is another name of Surya.

According to astrology, Sun is said to be a little malefic planet. Sun represents fame, kingship, courage, father and authority. He is the ruler of Leo zodiac sign. The malefic or benefic effects of Sun depends over its planetary position in the zodiac of the native. If Sun is making conjunction with Jupiter in a birth chart, it may bring very positive effects in the natives life.

Sun transit in 2014 may give you positive results like honor, profits in business, etc. It may also give you some negative effects like disputes because of ego and fights with siblings. The Sun transit in 2014 will leave more impact on your zodiac sign than other planets.