Planet Jupiter: The Guru in Astrology 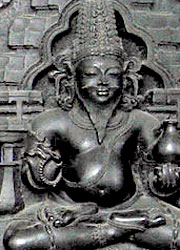 The Symbol of Wisdom, the God of righteousness and of Justice is none other than 'Planet Jupiter' or Brihaspati Grah. Various mythology and religious beliefs are allied with planet Jupiter. This planet is believed to be the "Lord of Prayers and Devotion" and "Mentor of Gods or Deities". Venus is enemy to this Planet and they are calm with each other only in heavens. It is one among the seven classical planets that can even be seen with our naked eyes. Planet Jupiter is main ruling planet for the children, which is seen as a factor or 'Karak' whenever considering about children.

Jupiter rules over law. Jupiter is fiery, decent, profitable, masculine, cheerful, optimistic, liberal, positive, and venerable planet. It governs Sagittarius (9th sign of the Zodiac) and Pisces (12th sign of Zodiac). So, people, with Jupiter as ruling planet born either in Thursday or in Zodiac signs Sagittarius and Pisces, obtain revered qualities. They will be honest, true person, sincere, dutiful, and law-abiding individuals.

Visibility of Jupiter -In Universe

In the Universe, Jupiter is the fifth planet and 500 million miles from the Sun, and the largest planet in the solar system with a diameter of 142,984 km at its equator. Jupiter is so massive planet covered with clouds of different gases and liquid matters are inside it. If the Earth has only one Moon, Jupiter has eleven Moons. It apparently appears bright in sky and anyone can easily notice its visibility in night-time. It is round in shape and flattened at the poles. It rotates very fast and on its axis just like earth, and it completes one rotation in approximately 10 minutes. It is one among the seven classical planets that can be easily seen with our naked eyes.

Jupiter represents 'Dhakshinamurthi God' to dispel darkness and ignorance, and to endow wisdom. It is said to be the 'Devta Guru' or 'Mentor of Deities' comprising nature of a teacher. Dakshinamurthi God resembles the Hindu God Shiva and is worshiped as the God of wisdom, meditation, and purity. "Dakshinamurthi" is Sanskrit word comes from combined words "Dakshina (South)" and Murthi (Stone image), which means "one who is facing south'. This Lord is very popular in South India, especially in Tamil Nadu states. Some believers also regard it as "Narayan". In ancient Greek mythology, planet Jupiter is "ZEUS"- the father of the Gods; Egyptians regards it as "Ammon", and Babylonians and Chaldeans call it "Merodach". Jupiter is considered to be the Lord of Righteousness and Justice. It is also the symbol of wisdom.

In Vedic or Indian Astrologist, Planet Jupiter is the rulling planet of zodiac signs Sagittarius and Pisces. In India, we call this planet also "Brihsapati" and Guru" Grah. It gives both good and ill effect after conjoining with other planets. Vedic astrologists believed that Jupiter is leader or mentor of Gods who always helped them to direct right directions and helped them against devils or demons. In language Hindi also, the word "Guru" means "teacher" and "Brihaspati" means "Lord of Prayer and Devotion". Jupiter governs power as well. Rig Veda (Indian ancient scripture) and Hemantha Ruthu (December and January) are under the rule of this planet. Jupiter is also regarded to be the 'Chief Governor for money'. If the planet Jupiter is strong and well posited in one's horoscope or native's chart, the person will get supportive help till the last moment of trouble and will overcome life threatening problems without much difficulty. People, with Jupiter as ruling planet born either in Thursday or in Zodiac signs Sagittarius and Pisces, possess some fine qualities. They will be honest, true person, sincere, dutiful, and law-abiding, logical and broad-minded individuals.

If Jupiter is well-posited in one's chart, and it is beneficial in nature, the person will definitely get merciful benedictions of this planet. The person will get respect in a good reputation in society for sure. Pease, prosperity, progress, fine health, and abundant wealth are bestowed by beneficial Jupiter.

But, if Jupiter is afflicted or week in one's chart, or owns unfavorable houses and occupies evil signs and stars, the native will be an extremist, liberal, lavish, careless, and extravagant.

Jupiter and Sun, in a good aspect, offer the native to recover soon from any critical disease. The native will earn a fine friendship list from his genuine and soft behavior, and he will be a broad-minded person.

Moon and Jupiter, in a good aspect, make the native noble and optimistic, and help him to owe general success in life.

Mercury, forming favorable aspect with Jupiter in one's chart offers him a strong - heart. Even, at desperate serious condition, the person will not loose his heart and continue his faith because of favorable aspects between Mercury and Jupiter.

Although the planet Venus is considered to be the enemy of the planet Jupiter, a good affiliation of both of them in native's chart indicates a grand success in life. He will endow abundant money, and enjoy all fruits of life, will get a good life partner. He will owe an admirable image in society.

But, if the Planet Jupiter and planet Venus have formed an evil aspect, the native will get troubles, and will see many delays in life, especially at the time for taking pensions.

Moreover, there are other planets that forms good and evil aspects with planet Jupiter and influence the native's life.