Planet Mercury - In The Word of Astrology 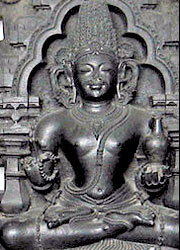 Intellectual, ingenious, convertible, dualistic, mutable, and feminine planet Mercury is very near to Sun and one of the four terrestrial & innermost planet of the solar system. It is both benefic and malefic planet by its nature depending upon its position in one's Kundli. "Atharva Veda (Hindu Scripture)", "Sharat Ritu, that is, around October and November", and the "color green" are governed by this planet. Mercury's fortunate number is 5. Mercury is the chief governor for education and main ruling planet (Karaka) of Uncle.

Mercury is one of the inner planets in the Solar system. It is an average about 36 million miles away from the Sun. Planet Mercury has no oxygen, no atmosphere, but has immense heat. It is a dry, fastest moving planet, and very small in size. It is also one of four terrestrial planets in our solar system which is also similar in appearance to the Moon. The orbit of Mercury is also eccentric and much elongated. It completes its rotation round the Sun in 88 days. It is also one of the very nearest planets to the Sun. Planet Mercury expose unbelievable atmosphere. One half of Mercury is extremely hot but the other half is enormously cold. It is shocking to believe that sometimes temperature may reach 450 degrees Celsius in day time in this planet and sometimes there is no light from the Sun. So no living organism can think to survive here. It is very far from the Earth and can't be seen with our naked eyes, but we can observe it through a telescope.

Planet Mercury is 'Budha Grah' in Vedic or Indian Astrology. It is also regarded as the God 'Kesava', 'Madava' or 'Narayan' by Hindus. Ancient name of Mercury was 'Thoth' or 'Hermes'. Roman mythologists believed that the planet Mercury was the Son of 'Jupiter' and 'Maia and Maiestas'. He was also a 'messenger of Gods' wearing winged sandals and the 'God of Trade'. 'Mercury' means also 'Commerce' from Latin origin. Mercury is said to be the inventor of Lyre. He always shows duality and lacks concentration. Vedic Astrologists conceive it as Grah Budh-Sun of Chandra (Moon) with Tara (Taraka). He is the God of merchandise and protector of merchants. He rides a carpet or an eagle or a chariot drawn by lions with carrying a scimitar.

"Planet Mercury" or Budh Grah" is a changeable, neutral, intellectual, indecisive, effeminate, dualistic, and feminine planet. Planet Mercury is the ruler of third zodiac sign Gemini (Mithun) and 6th zodiac sign Virgo (Kanya). The person born with Mercury as ruling planet is highly intellectual, creative, and analytical and possess with a catchy mind. Mercury with good aspects shows a little diplomatic brain, and excellent disputant character. The native will highly believe in logical things, he will convert himself according to the situation. Planet Mercury rules over one's mentality, central nervous system and the body language. It is also a talkative planet so people born with the ruling planet Mercury can become successful salesmen, marketing person, insurance agents, and Public Relations executives with excellent communication skill. Planet Mercury governs Atharvanan Veda (Hindu Scripture), and Sharat Rithu or October and November. Green color is also governed by this planet.

Influence of Planet Mercury in Horoscopes and Astrology

According to the Western Astrology system, Planet Mercury is unable to form any major aspect with other planet as it can never be more than 28 degree from Sun. Anyways; Planet Mercury shows both benefic and malefic qualities. It is a convertible planet by nature. If Mercury conjoins with other planets in good aspects it shows benefic results but if it occupies evil houses in one's horoscope it may show worse outputs. For examples:-