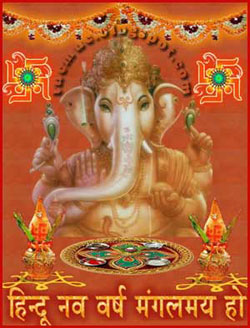 Hindu New Year is observed in the Hindi month Chaitra. It is celebrated in each and every part of India. Every region has their own rituals to celebrate this occasion. It is also known as Gudi Padwa, Vishu or Ugadi. In 2017, it will be observed on 28 March. It is mainly celebrated in Telugu and Kannada communities. Let's know more about this occasion through this article.

Indians also celebrate the worldwide famous International New Year that comes on 1st January every year. However, they also celebrate Hindu New Year as per their regional and religious beliefs. As mentioned before, India is a continent in itself. Each state is very unique and different from each other. Therefore, each region has its own way of celebrating Hindu New Year.

Indeed India is not a religion confined country, but as majority is of Hindus, New Year is celebrated as Hindu New Year. As different regions of India have their own way of celebration, also they have their unique dates to celebrate the same. For example, people from Western India celebrate New Year in around the month of October, whereas some parts of that region only celebrate it at the time of Diwali. On the other hand, East Indians celebrate their New Year around the month of April.

My Style of Celebration!

Celebration of New Year varies from region to region. Each community has its own way of welcoming the New Year. Let's start with North India.

North Indians decorate their houses and surroundings with beautiful lights and colors. People of Central India hoist orange flags on the top of the buildings. East Indians buy gifts for their near dear ones, whereas South Indians decorate the entire surroundings. Women of South India craft a special tray consisted of beautiful gifts, delicious food items and colorful flowers. As per their custom, children keep their eyes closed till the time decorated tray doesn't come in front of them.

West Bengal Hindu New Year: West Bengal will celebrate New Year in 2017 on 15th April. This day is also known as Poila Baisakh. People of West Bengal cherish the bliss of this beautiful day by exchanging gifts with their family as well as friends.

Assam Hindu New Year : Assamese will also celebrate it on 14th April 2017, as per their traditional calendar. Most of the customs and rituals of Assam and West Bengal are quite same.

Maharashtra Hindu New Year : Marathi Hindu New Year also known as Gudi Padwa in 2017 will be celebrated on 28th March. It is basically the festival of Kannada and Telugu communities.

Punjab Hindu New Year 2017: Punjabis will embrace the Hindu New Year 2017 on 14th April. During the time of New Year, people of Punjab decorate their houses with colorful and beautiful lights. Punjabi people also know this festival as Baisakhi.

Kerala Hindu New Year :Hindu New Year 2017 will be celebrated in Kerala when Sun will enter the constellation of Leo. It will happen in the month Medam. People of Kerala know this day as Vishu.

Andhra Pradesh & Karnataka will celebrate the Hindu New Year 2017 on Chaitra Shuddha Pratipada as per their traditional Calendar. People of Karnataka and Andhra Pradesh also know this festival as Ugadi.

Like the whole world, people of India also celebrate Hindu New Year with equal zeal and gusto. Indians use so many beautiful and colorful lights for night-time decorations. Apart from this, they also design wonderful Rangoli in their surroundings. Some people show their delight by doing fireworks. Overall, it comes out as a wonderful celebration. As Indians are quite religious and the dominating religion is Hindu, people worship the Hindu deities. It is believed that there are 33 Crores Deities in Hindu religion; hence everyone worships the deity of one's choice. Mostly, Goddess Lakshmi and Lord Ganesha are worshipped on this occasion.

Too much on spirituality? Let's look up to another side of this wonderful festival. People share their happiness with their closed ones by exchanging gifts. Hindu New Year is like Christmas. People get a chance to visit their loved ones. The most common gift that visitors bring to their loved ones house is sweets and coins. Indeed, it is an amazing festival bringing people closer and inculcating the feeling of brotherhood as well as humanity. This makes us understand the value of society, socializing, relations and humanity. Cherish the glory of Hindu New Year by becoming an active part of it. Happy Hindu New Year!