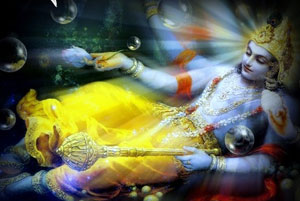 Devshayani Ekadashi is observed on the 11th day of Shukla Paksha in the Hindu month of Ashadha. In 2017, it will be marked on 4th of July. As per our Scriptures, on this day Lord Vishnu goes to sleep. No marriages take place as it is believed that our Gods are sleeping. It is also known as Ashadhi Ekadashi. Read on to know more...

While celebrating Devshayani Ekadashi, it is good idea to know abou the legend associated with this festival. As per the Hindu legends, on Devshayani Ekadashi Lord Vishnu goes to the Kshir Sagar (ocean of milk) and sleeps on the Shesha Naga (The Divine Snake). He rests there for four months and wakes up to return to Vaikuntha on Prabodhini Ekadashi. This period between the two Ekadashis is known as Chaturmas, which is a four month period of rainy season. During this period, devotees worship Lord Vishnu and Goddess Lakshmi. Also, it is advised not to travel in this period as the rainy season is not safe for traveling. Narada Muni asked his father Lord Brahma, the significance of this day. The story of this Ekadashi was then narrated by Lord Brahma to his son Narada Muni. During the Satyug period there was a benevolent and kind King named Mandhata. His kingdom was experiencing a severe drought since three years. The people of the kingdom were anxious and apprehensive for their future. Seeing this, the King went to visit a saint named Angira. During those times even a small mistake meant a lot to everyone. The sage told the King that a man in his kingdom was not performing proper rituals. He was the reason for bringing wrath to the kingdom and its inhabitants. The saint suggested the King to kill the man and end the misery of his people. The King though did not agree to kill a man just because of a foolish reason. He asked the sage for another way to end the problem. The saint told the King to fast on Devshayani Ekadashi with the people of his kingdom. Following the sage's advice the King along with people fasted on Devshayani Ekadashi. As a result the Kingdom received heavy rains ending all their miseries. This proves that observing this fast properly ensures our prosperity and happiness. Also, we can connect to the supreme power to get spiritually enlightened. The light we receive from the Almighty ends the darkness in us and we become aware. This state of complete awareness frees us from all the worries and we are able to live life to the maximum.

Connect To The Almighty

This day enable devotees to seek the blessings of the Almighty. Like other Ekadashis this day also helps the devotees to attain salvation and freedom from the worldly chores. It is believed that by observing a fast on this day all the wishes of person get fulfilled. This day gives us the energy to face the challenges that life throws at us. This is the resting time of the Gods and therefore no religious activities are performed during this time. We hope that this article has helped you understand the significance of Devshayani Ekadashi. This day fulfill your wishes and takes you on the road to salvation and liberation. This year, choose this Devshayani Ekadashi to connect yourself with the ultimate source of power Lord Vishnu. We wish you a very happy and prosperous Devshayani Ekadashi. May Lord Vishnu shower you with his divine blessings this year and in the future.