Holika Dahan 2017 : Burn The Evil Within 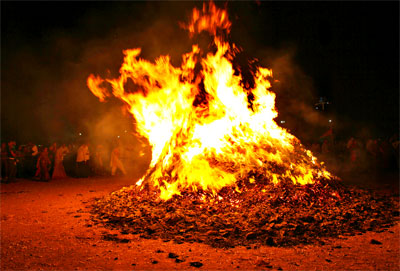 Holika Dahan has a special religious significance. As per the legend it is believed that on this day Kamadeva was burned to ashes by Lord Shiva as he disturbed him during his meditation. This day is celebrated to commemorate the burning of Kamadeva.

As per another legend there lived an evil King named Hiranyakashipu. He was the King of demons. He had a boon from Lord Brahma that he could not be deafened by anyone. Due to this blessing he became very arrogant and started treating himself as God. He demanded that all the people should worship him and not Lord Vishnu. Though he was telling everyone to worship him yet his own son Prahlada was a devotee of Lord Vishnu. Inspite of many threats he could not change Prahlada's mind. The evil King then tried to kill him but all went in vain.

Frustrated with all the failed attempts he called his demon sister Holika. She had a boon that fire itself could not burn her. In order to kill Prahlada, he was made to sit on Holika lap who sat on a pyre. Due to Lord Vishnu's blessings fire could not burn Prahalad but Holika was burned to ashes. The day of burning down of Holika is celebrated as Holi.

In Mathura, Holi is celebrated for 16 days to commemorate the divine love Lord Krishna and his beloved Radha. Since the time comes during the spring, it is called the season of love.

As per a story, once Narada Muni told the eldest Pandava Yudhistira to observe the auspicious day of purnima in the month of Phalguna. He told the king to collect woods and make a Holy pyre and burn it. He told him that by doing this the entire kingdom will grow and prosper.

Holika Dahan in India is celebrated with great fervor and joy. People from all aspects of life come forward to celebrate this festival of colors. A pyre of woods is set on fire to commemorate Holika Dahan. People worship the pyre and dance around it to welcome the spring. The next day people play with colors. They apply natural colors to each other and wish everyone. On this day all the people forget their past differences and come together to celebrate this holy festival. Playing with colors lets us dance to the tune of nature which is in complete celebration mood. The day gives us an opportunity to revitalize and rejuvenate self. Like all the festivals of India Holika Dahan is also celebrated differently in different states of the country.

The Spiritual Significance of Holika Dahan

It can be concluded that Holika Dahan is a festival of colors, friendship, brotherhood and unity. In India people cutting across the religious lines come together to celebrate Holika Dahan. There is a great spiritual significance of Holika Dahan. The festival of colors stands for celebrating the victory of faith and truth over evilness. The day tells us that whatever we have is gifted by the God himself so we should not be arrogant about it. With the burning of Holika we should burn the evil inside us and purify our soul.

We wish all the readers a very happy Holika Dahan 2017. We pray to God that this season of colors brings a new spring on to your life.