Kalashtami 2016 dates are here to tell you about the best days to appease Lord Kaal Bhairav this year. Go through this highly informative article and know the right way to free yourself from the troubles and miseries of this materialistic world. 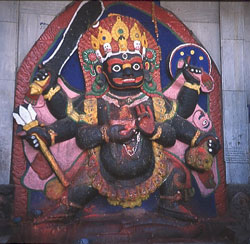 Kalashtami is the term given to the eighth day of the dark half of every lunar month. This day is dedicated to the Kaal God, generally known as Kaal Bhairav (Avatar of Lord Shiva). On this day, devotees observe fast and perform Puja to please the lord. Kalbhairav Jayanti is celebrated all over India.

People of North India follows Purnimant Calendar; therefore, they celebrate the main Kalashtami in the Margashira month. On the other hand, followers of Amavasyant calendar celebrate it in the month of Kartik. However, the Kalbhairav Jayanti falls on the same day for the both the calendar followers.

Let us take a look at the dates of Kalashtami 2016.

Note : Fast of Kalashtami is observed a day before Ashtami i.e. Saptami (the seventh day).

The legend describes the tale of the day when Lord Vishnu and Lord Brahma had an argument on the topic that who among them is more powerful. The argument rose to such a height that Lord Shiva had to call a meeting including the great scholars, sages, and saints to find a solution and reach the conclusion. After the meeting came to a solution, Lord Vishnu agreed , but Lord Brahma did not accept it. This outraged Lord Shiva, as it was an insult to him and he took a destructive form. Hence, a new Avatar came into existence which was of Kaal Bhairav. In this Avatar, he came riding on a black dog with a truncheon in one hand. That is why he also got the name 'Dandadhipati'. This horrifying form of Lord Shiva scared the demigods. Seeing this situation, Lord Brahma apologized in front of the Kaal Bhairav Avatar of Lord Shiva. After being convinced by all the Gods, saints, sages and Lord Brahma himself, Lord Shiva restored to his original form.

It is believed that worshiping Kaal Bhairav blesses the devotee with ultimate boon. An all night vigil is observed by the devotees to worship the lord. Kaal Bhairava is worshiped along with Lord Shiva and his consort Goddess Parvati. Kalbhairav Katha is the most important thing to recite during the Puja.

As Lord Bhairava rides on a black dog; therefore, feeding a black dog enchants the Almighty. Holy bath is taken in sacred rivers, after which Shradh or Tarpan is performed. In the end, prayers are offered to Lord Bhairo Nath.

Worshiping Lord Bhairav helps to get rid from sufferings and pains, especially the troubles related to paranormal world. The devotee cherishes all round success and a healthy life free from any sort of diseases.

This was all on Kaal Bhairav Jayanti. With this brief article on Kalashtami, we hope you will make best out of this auspicious day and make your life beautiful. Happy Kalashtami 2016!