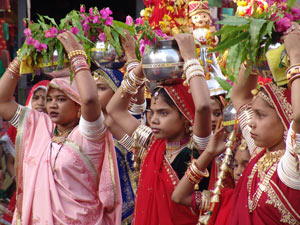 Teej is mainly celebrated to welcome the clouds, rain, greenery and birds with some specific rituals and customs. It is mainly observed in western and northern parts of India. On these days, women observe fast for their husbands' longevity. To know more, keep on readin...

Teej is basically a festival of Hindu women. The Hindu women observe fast on Hartalika Teej. This festival of Hariyali Teej is celebrated on the third day of Shukla Paksha or the bright Moon fortnight of the Shravan month as per the Hindu calendar. The Hartalika Teej is celebrated on the third day of bright half of Bhadrapada. The Shravan month is commonly known as Saawan. The month of Shravan mostly falls in the end of July and beginning of September. The festival of Teej is dedicated to Goddess Parvati as on this day she was united with Lord Shiva as her consort. Fasting on the festival blesses a woman with marital bliss, well being of the spouse and welfare of the children. The festival blesses one with purification of soul and body. The Teej festival lasts for 3 days and includes rigid fasting followed by sumptuous feasts.

The festival of Teej also celebrates the arrival of monsoon after the season of scorching heat.

Hartalika Teej will be celebrated on 24 August 2017. The name of the festival is believed to be originated from a red insect 'Teej' that emerges from the ground during monsoons. The legend has it that on this particular day only Devi Parvati came to Shiva's abode that marked the union of the husband and wife.

The festival of Teej symbolizes the union of Shiva and his consort Parvati. The festival is a beautiful example of wife who can sacrifice anything just to win the heart and mind of her husband. The legends also states that Goddess Parvati once carried out a painstaking fast for 108 years just to prove her love and dedication to Lord Shiva. Only after this Lord Shiva accepted her as his better half. In some scriptures it is also mentioned that she was born 107 times and on the 108th time she was born as Parvati. It was on her 108th birth that she was granted the boon to become the wife of Lord Shiva as a result of her long penance and determination. The festival of Teej is celebrated in the honor of Devi Parvati. Goddess Parvati is known as 'Teej Mata'. The women who observe fast on this auspicious day call Goddess Parvati as Teej Mata. The festival is celebrated and a fast is observed on this day to get a good husband and enjoy a blissful married life.

Hariyali Teej is celebrated with great joy by the women. They dress up beautifully, wear beautiful jewellery and take swing rides.

The Celebrations of Teej

Women on Teej observe fast and the festival is marked by colorful celebrations. On this day women take swing rides, sing and dance together and apply henna. Applying beautiful henna designs on the hands is the essence of this festival. Married women and unmarried girls apply henna on their hands on this festival. The houses are decorated with beautiful flowers and lights. Women also wear beautiful saris and attractive jewellery and visit temples to offer prayers to the Teej Mata or Goddess Parvati.

Prasad is prepared that includes delicious sweets and it is distributed among the women.

Teej is a vibrant festival and it is celebrated by women wholeheartedly. Women observe fast and worship Goddess Parvati for the well being and long life of their husbands. Hartalika Teej is also celebrated by unmarried girls. They observe fast in order to get a good husband just like Shiva. Lord Shiva is believed to be a very good husband in Hinduism.