The largest planet of our solar system, Jupiter will transit in 2014. What are the dates of its transit? What are the astrological and mythological aspects of Jupiter? Read this article to know everything about Jupiter transit 2014 & planet Jupiter. 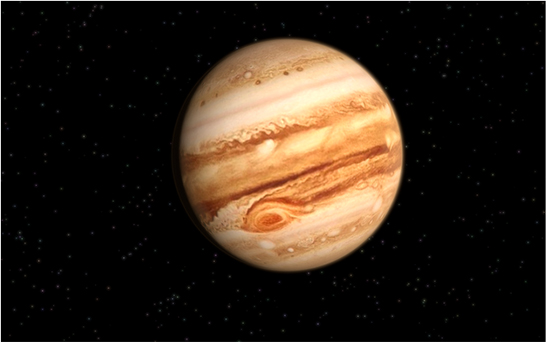 In the beginning of the year, Jupiter will be present in Gemini sign in retro motion. After that, it will switch in the following:

This was all about the Jupiter transit in 2014. Now, let's get to know more about the planet Jupiter.

Jupiter is the largest planet in our solar system, but most of the mass of this planet is made up of gases. The primary gases of this planet are Hydrogen & Helium. The planet looks golden because of the gases in its atmosphere.

According to the Hindu mythology, Jupiter is known as Brihaspati, which is the God of Devotion. This planet is also said to be the teacher of all the other Gods. Jupiter is the planet of spirituality and prayers. Thursday is considered as the day of planet Jupiter. This day is also called as Brihaspativar. People worship Lord Brihaspati & Lord Vishnu on this day. Jupiter is the teacher of light science, which includes both astronomy and astrology. Jupiter controls the movement of all the other planets in the sky.

According to the astrology, Jupiter signifies wisdom and ideology. It is said that Jupiter rules our thinking process. Our ideology and interests are because of Jupiter. Our future, success and achievements are all under planet Jupiter. Jupiter has a significant effect on females, it tells about their marriage and the relationship with their husband. It changes the effects of any planet associated with it in a native's life in a positive way. Although Jupiter is a positive planet, but it may give you some negative effects like laziness, fat. Despite of that, Jupiter is the reason, if you love animals. Sports is also one of Jupiter's favorites. Jupiter influences people having teaching profession in religious field. Politicians, judiciary, priests and ambitious people also come under the influence of Jupiter. According to the numerology, Jupiter is the ruler of number 3.

Jupiter transit 2014 may bring some good effects on all the people associated with the teaching profile and the judiciary field.

So, this was all about the planet Jupiter & Jupiter transit 2014. We hope that this information was helpful for you. For more such articles keep reading AstroSage.com