Mercury, the first planet from the Sun, will transit in the year 2014. What are the dates of the Mercury transit in 2014? Want to know about the mythology & astrology of Mercury? Read this article to answer all these questions about planet Mercury. 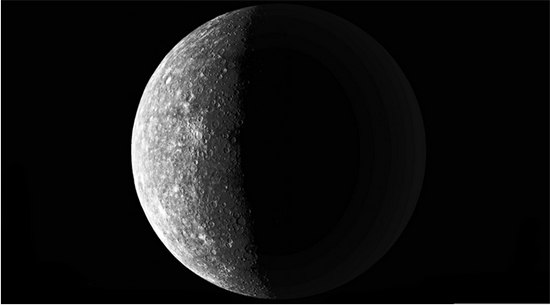 Transits effects every person's life and this is why everyone wants to know all about the transits of planets. Like every other planet, Mercury transit 2014 (Budh Gochar 2014) will also bring some important changes over all the zodiacs. These changes depend over position of the planet in your birth chart. Being a neutral planet, Mercury may change its behavior according to the other planets' conjunction. Mercury transit 2014 (Budh Gochar 2014) may bring positive changes in your zodiac if a benefic planet is there with it. It may even give you negative effects if a malefic planet is there with it. You should be knowing all about the transits of Mercury so that you can get to know the effects of these transits in your life. The planet of communication may affect your behavior during its transit. So, be prepared for the changes this planet is going to bring. Let's throw some light over Mercury transit 2014.

In the beginning of the year 2014, Mercury will be combusted in Sagittarius sign. Transitions after that are mentioned below:

So, this was all about the Mercury transit in 2014. Let's get to know more about the planet Mercury.

According to the Hindu mythology, Mercury is called Budh. Budh is the God who protects merchants. He is the lord of Budhvar (Wednesday). It is said that Mercury is the son of Moon.

According to the astrology, if Budh is not joined by a malefic planet, it gives benefic effects to the native. Mercury is a fast moving planet, it may be giving positive effects to you or in some time only it may bring some negativity. So, be prepared for every Mercury transit in 2014. The planet has a command over communication. Whatever you talk or interact may depend over Mercury transit 2014.

Mercury is the ruler of Gemini and Virgo zodiac signs. Mercury signifies senses, education, business, mathematics, science, intelligence and communication. If Mercury is in your birth chart, you are blessed with intelligence. Mercury also has a dual behavior property, there may be chances of the same during Mercury transit in 2014 (Budh Gochar 2014). Especially, in relationships, it may bring some confusions and misunderstandings. So, be ready for the Mercury transit 2014 (Budh Gochar 2014) and get all the information about the transit at AstroSage for the remedies. Mercury transit in 2014 will give you most of the benefic effects, but it may vary in every zodiac sign.