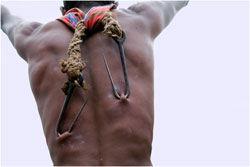 Charak Puja also known as Wheel Puja is going to be celebrated in 2013 on 14th of April, Sunday. It is believed that this festival is celebrated in commemoration of a great King who got a chance to have an interaction with Lord Shiva. He could make this happen after years of penance. The peculiarity of this festival is that the devotees of Lord Siva who belong to lower castes celebrate this festival by assuming themselves a hermit. They dress like them for a week or ten days. Further, they march on the streets soliciting for alms from the people.

Charak Puja is celebrated on the 28th, 29th, 30th and 31st day of the Hindu month Chaitra. Devotees who wish for more blessings of Almighty start planning for this festival from beginning of the month Chaitra. They arrange for various religious ceremonies, abstain from Tamasik (food that arouses the feelings of desires, rage and sexuality) food, spices, common sea salt, oil and other delights of life. Also, they sleep on coarse blankets or on rushes.

On the first day of festival, hermits keep a partial fast. In this fast, they eat such a food that has been cooked in one utensil at the same time.

Second day is known as the fruit day. In regional language, it is known as Phalerdin. On this day Sanyasis gather in huge mass and march from one village to another. With this, they ask the inhabitants of those regions for whatever fruit they have. Further, they gather at the temple of Lord Shiva and donate all the collected fruits there. After that in afternoon, they again start the march to collect firewood from people and put them again at the same place that is Siva temple. Finally they assemble at the temple and treat themselves with the collected fruits. During the meal, perfect silence is maintained. As per belief, any utterance of human sound ceases the meal immediately. To avoid this mishappening, they keep on beating the gong sound. It is done to absorb all the sounds around in gong sound.

A bundle of thors are placed in front of the temple. Hermits cast themselves over them. After that, the pile of woods is fired which soon starts blazing briskly. The hermits scatter the embers around and dance over them. They throw them in air or on each other.

The third day is celebrated by piercing the tongue and sides. At Kolkata, this ceremony is done at the famous temple of Kalighat. People in huge masses gather there with drums, gongs and other musical instruments. Along with this, they also bring ramrods, spits, canes and various other articles to pierce through their tongues as well as sides. Some exhibit quite uncanny acts by dancing in most frantic ways, wearing tinkling anklets.

The fourth day is the most important one, as the meaning of this festival realizes on this day. In the afternoon of fourth day, the Charak (swinging of wheel) takes place. This festival is celebrated in a bizarre and aggressive manner. Iron hooks are tied on the backs of hermits and they are then suspended on a crossbeam placed on the top high post. Further, they swirl around in a rapid speed by the means of rope. These swinging posts are generally placed on quite conspicuous places of the towns and villages. Usually 5 to 10 men swing one after another on one post. Obviously, these acts tear up their backs and they fall on the crowd surrounding them.

On the other hand, some hermits do something different. They cast themselves on a bamboo stage embedded with iron spikes or knives stuck in bags of straw. These instruments are laid in a reclining posture. It is done for if the person falls; the instruments are pressed down by his weight and not enter in the body.

You must have understood that this festival is celebrated in an uncanny way. However, it will be something different to experience. It is advisable not to try these acts as it might injure us. You may enchant the Almighty in some decent ways too This was all brief on Charak Puja. Happy Charak Puja 2013!