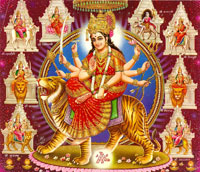 Dates of Magh Gupt Navratri in 2013

Gupt Navratri is considered as very powerful time of the year. One can fulfill all sort of desires in this time. We will here tell you, how.

If you are going through troubles in your love life and you and your partner are not doing well with each other. In other words, you find yourself fighting with each other most of the time. Then, chant the following mantra using a Rudraksha rosary. Chant at least one rosary a day. This will definitely improve your relationship.

Burn a fire in front of you while chanting and pour some Ghee after reciting the mantra each time. Also, chant this mantra 21 times just after waking up.

In order to protect your kid from evil eyes, chant the Shlokas from Hanuman Chalisa. Along with this, mark the forehead of your kid with vermillion using your left foot. Apart from this, if you are unemployed, worship Lord Bhairav in temple. For financial gains, write the name of Ram on a Peepal tree leaf everyday and put it in a Hanuman temple. If you wish to stay at bay from diseases, chant one rosary of following mantra everyday -

This will not only improve your health, but also do wonders to the health of your family members. Now, if you have problem in getting married. Put a picture of Lord Shiva as well as Goddess Parvati at the place of worship and chant the following mantra 5 times everyday -

It is not like that these mantras are meant to work during Gupt Navratri only. It is just that these methods work more powerfully during this auspicious time. Hence, you may also perform another Sadhanas during the time of Gupt Navratri to fulfill your desires. With this, we hope you get what you need. Happy Gupt Navaratri 2013!