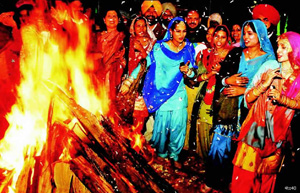 Lohri in 2016 is on Wednesday, January 13. The Punjabis and Haryanvis celebrate this festival with sheer joy and immense enthusiasm. The festival is linked to agriculture and harvest and is celebrated throughout Haryana, Punjab and parts of Uttar Pradesh, Jammu and Delhi.

The festival is believed to be originated in Punjab. The festival is celebrated on the eve of winter solstice. However, the festival spread at a fast pace and soon it was celebrated in Haryana, Sindh, Jammu, Himachal Pradesh and Delhi. The Bengalis and Oriyas also participate in the celebration of this festival.

Punjab is going to celebrate Lohri in 2016 with great joy again. You must be pondering over the thought that why this festival is solely linked to Punjab and not other regions of India? Well, the answer is that this festival is the cultural celebration of Punjab and with time, the festival spread to other regions and became extremely popular. The festival is not celebrated on the eve of winter solstice but at the last day of the month in winter solstice. It is believed by many as well as the Brahmins that no religious celebration must be done in the month of Paush. On the day kids bring wood from their parents, grandparents and relatives to their home and burn it at night. A camp is set and people fire the wood and indulge into merrymaking by dancing, singing and eating.

It is believed that earlier the festival of Lohri was celebrated on winter solstice. It is also believed that the night of Lori is the longest night of the year and after that the day time and brightness increases.

The farmers of Punjab take the festival Lohri as the beginning of new financial year. For this reason too, the festival is considered to be important.

On Lori, during the daytime, children go from door to door singing folk songs. People give sweets and sometimes money to the children. Turning them back empty handed is regarded to be inauspicious. Whatever the children get is collectively termed as Lori. It includes sweets, gajak, til, gur oil and peanuts. Lohri is then distributed to all at night during the celebration of the festival. Heap of Wood is fired and people throw Lohri in it thanking the god for good harvest and seeking his blessings.

A bonfire is lit in the main area of the region or village. People eat til sweets, gur, sweets, gajak, peanuts and sit around the fire till it dies out. People also perform prayers by circling the fire. People thank god for whatever he has given to mankind and ask for continued protection.

Some people celebrate Lohri as a private gathering and some as public celebrations. People living in urban areas also celebrate Lohri. It is a festival that gives an opportunity to people to interact with family and friends.

Go ahead and celebrate Lohri 2016 with sheer joy and absolute celebration. Wish you a happy Lori 2016!