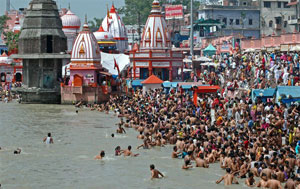 Kumbh mela 2013 will be an event worth watching and experiencing by every individual. It is a mesmerizing event that holds great mythological and religious significance. The light of faith and devotion toward the Almighty in the heart of a Hindu would be clearly seen in the Kumbh mela 2013. A Kumbh mela is only organized in four cities due to the reasons stated in mythology. The huge event of Maha Kumbh mela 2013 will be held in the city, Allahabad. Be a part of such pious religious occasion and establish a never ending ecstasy in your mind.

Kumbh mela is the most awaited Hindu event that takes place between some decided intervals of time. With the reference of the occurrence time, the Kumbh mela can be classified as Purna Kumbh mela, Ardh Kumbh mela and Maha Kumbh mela. Kumbh mela is said to attract the largest amount of people all around the globe. Kumbh mela in 2013 is also expected to welcome more people than ever into its aura. The Kumbh mela is not confined to any geographical limits. Therefore, believers from all around the world will come and witness the charm of Kumbh mela 2013. Religious people full of undying faith can be seen bathing in the holy Sangam. They not only seek forgiveness for any sin that they did unintentionally but also take unbreakable oath of not committing any sin in their life. The aura of the Kumbh mela is as such that it will compel you positively to believe in the simplicity and power of good deeds and faith as well.

Kumbh mela has a very fascinating past that captivates the attention of its believers. Almost every Hindu is aware of the fact that once the Ksheera Sagar was churned by gods and the demons in order to posses the Amrita. The Amrita was possessed after the immense hard work of both the sides and after that they started fighting over it. During the fight of Asuras and devas, Lord Vishnu escaped with the Amrita. When the Lord Vishnu was flying with Amrita in his hands, few drops of Amrit got sprinkled over four cities. Those cities are Haridwar, Allahabad, Nasik and Ujjain. Therefore, the Kumbh mela came into existence and in today's day these four cities are the only organizers of Kumbh mela.

Now, it is clear to everyone that why only four cities can organize such huge religious pilgrimage over all the other cities. But, how the time of organizing is decided by these cities is yet a mystery. Many amazing facts are interlinked to this single Kumbh mela festival and it is also factual that the dates for the occurrence of Kumbh mela are decided with the position of Jupiter and the Sun.

Kumbh mela of 2013 is being celebrated in Allahabad as the Jupiter is in Taurus and the Sun is in Capricorn. Therefore whenever the Sun and the Jupiter are aligned in this manner, the Kumbh mela is organized in the city Allahabad. Allahabad, also known as Prayag, is the city of sacrifice that is going to experience one of the largest pilgrimages till date.

There are not many rituals that are to be followed during the course of Kumbh mela. If you have decided to be an important part of Allahabad's Kumbh mela in 2013 then first be sure that you have a pure heart. Taking bath in the holy rivers is the most significant ritual, as the water is said to be highly auspicious that washes all your sins and purifies you from within. Bathing in holy water during the Kumbh mela 2013 will take you to new level in which you will realize your worth and will commit yourself to good deeds with all your heart. The rituals also include talking and spreading the belief of God in one and all. People also tend to express their devotion and dedication with the means of songs. They sing deeply emotional songs that are dedicated to their particular deity.

Kumbh mela 2013 is a simple and an auspicious means for the purification of your soul. But, to show your real dedication toward the source the power, you are required to be good with each and everyone. Being good and doing good in your life will also purify you and the God will bless you enormous happiness without even being present in the Kumbh mela 2013 physically. Don't be upset and keep your soul clean and free and experience the 2013 Maha Kumbh mela from within if you can't attend it.