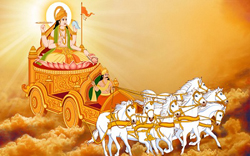 Ratha Saptami is a kind of very significant celestial events that happen every year. Ratha Sapthami in 2016 will be celebrated on 14 February. Sun is that celestial body which is responsible for the great event Ratha Saptami. On the day of Makar Sankranti, Sun enters Capricorn and also starts his journey toward North which is known as Uttrayana. Ratha Saptami is the seventh day of Shukla Paksha of the Hindu month 'Magh'. The journey of sun started from Capricorn for vernal equinox commences from this very day. Vernal equinox in simple terms is the day that has day and night of equal time in spring. Ratha Saptami has some other popular names too such as Magh Jayanti and Surya Jayanti. All the names of the Ratha Saptami have some unique significance. The name Ratha Sapthami is the symbol of Lord Sun's Chariot on which he starts his journey of vernal equinox, whereas Surya Jayanti marks the birthday of Sun on this day. In all, the day of Ratha Saptami is a sheer dedication to the Lord Sun. The remembrance of this day as the birthday of Lord Sun or his journey both leads to worshipping the Lord Sun.

Lord Sun is deeply respected and is worshipped with strong faith in India, indeed. There are several temples that are built in the honor of Lord Sun and Ratha Saptami is celebrated in all the temples beautifully. It is believed that Sun is the main source due to which life is sustained on Earth. Therefore, people do not miss this chance of expressing their gratitude toward Sun. Ratha Saptami in villages hold extreme importance as it also marks the beginning of harvest season for villagers.

The name of Ratha Saptami is itself an explanation of various things. It is believed that the chariot of Lord Sun used to be drawn by seven horses. These seven horses are the symbol of seven colors of rainbow and the seven days of the week as well. The whole religious significance of Ratha Saptami, Lord Sun and Chariot doesn't end here but the glory is far more extended. The chariot consists of 12 wheels that symbolize 12 different zodiac signs and the 12 months which constitute a year. The journey of Sun includes all the 12 zodiac signs and has its effects on all the natives individually. Each and every person on Earth deserves the kindness of Sun in equal share and this can be seen as the main purpose of Ratha Saptami.
Like all the other festivals the essence of Ratha Saptami is also expressed in its legend.

While celebrating Ratha Saptami in 2016, it is a good idea to know the legend behind this festival. In accordance to the Holy Scriptures there was a King who had one son. The son used to stay ill most of the time. The worries of the king were increasing day by day. Then, at the end he decided to consult someone. A very learned sage told the King that his son is not well due to some of his sins committed in past or past life. The sage also told him that his son should have faith in Lord Sun and then he should perform the rituals of Ratha Saptami which will cure him from everything. As soon as the son did the same, he got free from sins that he committed. This legend is the belief of the festival Ratha Saptami.

Customs and Rituals of Ratha Saptami

The customs and rituals followed on the day of Ratha Sapthami differ from region to region as per the religious importance. People start their day of Ratha Sapthami by bathing. Some people usually come out of their home and take bath in any holy river body. Various things like flower and water are offered to Lord Sun while worshipping in open space. People directly worship Lord Sun or they offer prayers to Lord Vishnu in his Surya form. In both the ways, it is essential to pour water in front of the Sun from your hands or any vessels.