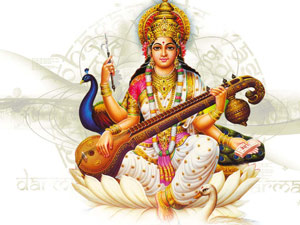 Saraswati Puja in 2016 will be observed on 12th of February. Every year, this Puja is performed on the day of Basant Panchami. In 2016, the glorious part is that Vasant Panchami and Valentine's Day are falling on the same day. Then, why to let this beautiful chance go? This time, if you are in search of a Valentine, make Goddess Saraswati your love and worship her.

We shouldn't say like that but Basant Panchami is more glorious than Valentine's Day. It is because Basant Panchami is not only dedicated to love, but also to art, wisdom and knowledge. Love is also considered as a form of art in Indian culture. However, our main concentration in this article is Saraswati Puja, we will now talk about that.

As the Goddess dedicated to Basant Panchami festival is Saraswati, a special ceremony of Saraswati Puja is performed on this day. Goddess Saraswati is like a chief guest on this day.

Maa Saraswati is the Goddess dedicated to music, knowledge, art, science and technology. The day of Basant Panchami is also known as Shri Panchami and Saraswati Panchami due to the importance of Goddess Saraswati for this day.

Worshipping Goddess Saraswati helps the devotee in fetching the immense blessings of Goddess to enlighten them with knowledge.

In ancient times, children used to be taught to write first word on this day. This ritual of initiating education in a child's life is known as Vidya Aarambham, Praasana or Akshar Abhyasam. As the festival is dedicated to the Goddess of knowledge, bodies and institutions allied to education organize Saraswati Puja on the day of Vasant Panchami.

Though Basant Panchami falls on the lunar fifth day of the month every year, but sometimes it also falls on the fourth day.

As per the belief of many astrologers, this day is also considered as 'Abujh' day, which means the most auspicious day to initiate any work.

Saraswati Puja can be performed anytime throughout the day of Vasant Panchami if not possible on the given auspicious time. However, the thing to be noticed is that the Puja should be observed while the fifth day is prevailing. Sometimes, fifth day doesn't commence throughout the entire Basant Panchami day, devotees should stay cautious in such cases.

Another reason for performing Saraswati Puja on Vasant Panchami is that Goddess Saraswati was born on this day.

How was Goddess Saraswati born?

As per a legend, during the construction of universe, Goddess Durga appeared first and evoked the trinity Brahma-Vishnu-Mahesh. Further, she requested the trinity to create a Goddess for each quality. Hence, Lord Shiva created Maa Kali from Tamoguna, Vishnu created Goddess Lakshmi from Rajoguna and Brahma evoked Goddess Saraswati from Satvaguna. After their emergence, Goddess Durga dedicated all these Goddesses to their creators to run the universe.

An idol or picture of Goddess Saraswati is kept in front. After that, a Kalash or pinnacle is enshrined. Further, the first Lord Ganesha and nine planets are worshipped. After all this, Puja (worship) of Goddess Saraswati begins. First of all, she is bathed and adorned with flowers, garlands, vermillion and other allied adornments. Further, gulaal is also offered in Maa Saraswati's pious feet.

White is the color of Devi Saraswati's attire. So, she is offered with white clothes. Yellow is considered as Goddess' favorite color in food. Therefore, some seasonal fruits along with some yellow dishes are offered to the Goddess. Some yellow sweets like sweet safforon rice, saffron porridge, yellow Halwa and Boondi, to name a few are also offered as Holy Food. Malpua and Kheer are the mostly offered dishes.