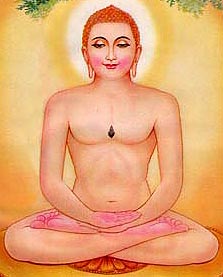 Mahavira was the 24th and the last Tirthankar in Jainism. Jain follow the path shown by Mahavira till date and his principles will be followed till eternity by the firm believers of Jainism. Mahavira was a royal prince by birth as he took birth as a son of King Siddhartha and queen Trishala. But, at the age of twenty he abandoned all the luxuries of life and for the next 12 years he lived as a hermit. The original name for Lord Mahavira is Vardhmaan and he earned the name Mahavira with his bravery. There were some stages through which a person had to pass to be known as a Tirthankar. These 12 years of Mahavira's life made him the Arihant of Jainism. Not all the Arihants get to become the Tirthankara.

The path followed by lord Mahavira during these 12 years was not an easy one. He gave up all his possessions including clothes and lived without anything. He learned to control his urges and needs and also like all other Tirthankars became non violent. He let all the living beings apart from human live peacefully. The path of Ahimsa is the main ethic that is followed by all Jains.

Mahavira Jayanti is a simple festival that is celebrated by all the Jain people with absolute faith and devotion. The first thing to be done on Mahavira Jayanti is the 'Abhishek' of the idol of Mahavira which means that the idols of Mahavir are bathed early in the morning. People of Jainism are so simple that they indulge themselves in the celebration with no external noise and disturbance. They peacefully get involved in the matters related to charity and also organize events in which they talk about the great Mahavira.

Poor people are offered food all across the country on the day of Mahavira Jayanti. Jainism is a religion that believes in living with love and affection and the people following Jainism spread the word of their Mahavira all around especially on this very day. The great temples that are built in the respect of Lord Mahavira witness large amount of people that pay their visit to the temple in the honor of their Lord on Mahavira Jayanti.

While celebrating Mahavir Jayanti in 2019, it is a good idea to know about Lord Mahavira and his teachings. Mahavira was born as a royal prince and his mother used to dream about arrival of a great leader during her pregnancy. The dreams of the mother of the Mahavira signified that a Tirthankara is about to come on earth and this made people extremely happy. As soon as the Mahavira was born, he was offered a bath with the hands of Lord Indra as per the scriptures. The birth date of Mahavira is considered as the thirteenth day of the rising moon of Chaitra.

The basic aim of Lord Mahavira which is being followed till date was to value the life and raise the standard of living of people. He gave many principles of living to the people and fulfilled his duty of being a Tirthankara to the best. All his principles are based on the upliftment of humanity and they together form a legacy of being a perfect human being for a person.

He also taught people to give up the love for materialistic happiness and start cherishing the real ones. He showed that how a person can lead his life happily by being kind and not at all selfish. Mahavira believed that the feelings such as anger, hatred and lust only cause harm to one's own character and one must know how to control such feelings.

The path created by Mahavira is not easy, but it leads to liberation of a soul from all the boundaries. Be a follower of Mahavira and experience the joy of being humble and extremely simple. Enjoy the Mahavira Jayanti 2019 to its best.