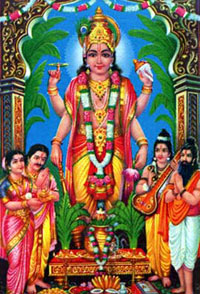 While celebrating Pavitra Ekadashi in 2016, it is a good idea to know about the legend of this festival. The story of Pavitra Ekadashi marks the importance of this day and also shows how a person can achieve anything if he has true belief in his devotion. It is believed that Lord Krishna himself narrated this story. So, this reduces any chance of this story being impure. Lord Krishna told Yudhistir that there used to be a brave King, who was very kind and his people used to love him a lot. He was brave at the battle field and kind with the people of his kingdom. But, he was very unhappy from inside as he didn't have any child. He used to spend a lot of his time in worshipping Almighty so that he could cherish the happiness of being called a father. Even after praying continuously he kept on failing. Then a sage came forward and helped him.

This miracle that was experienced by the King and Queen was only possible due to the fast they kept on Pavitra Ekadashi. One thing that must be noted is anything and everything is only possible if you have faith in you and the things you do. Almighty never likes to see his devotees in pain and to make them stronger he gives the difficult time. The ones, who don't lose their faith and keep on moving, survive the bad timing of their life successfully.

Pavitra Ekadashi is a day that purifies the soul of a person from within. This is done only when the person has no intention of doing wrong in his upcoming life. The blessings of a child and also the purification of soul is what Pavitra Ekadashi gets every year for the true devotees. If you have been looking for such a wonderful chance and have been seeking forgiveness for the wrong that you did then Pavitra Ekadashi is indeed the best day for you. Observe a fast with all your heart and feel the heaviness of soul leaving your body in no time. Make the best out of Pavitra Ekadashi in 2016.