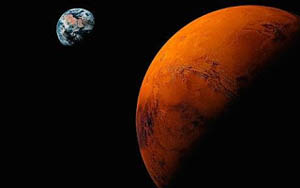 Mars transit 2013 is developed to present the list of the transit times of Mars in the year 2013. Mars transit 2013 will tell you when Mars is going to enter which sign. Hence, you may analyze your future accordingly by matching these transit events from the positions of planets presented in your personalized Kundali. Each planet has its own time of staying in one zodiac sign. For example, Moon stays in each sign for about 2.25 days; similarly Mars stays for approximately 45 days in each sign. Therefore, it travels with the transit period of 45 days in each zodiac sign. Let's now know which 45 days of your life are going to be affected by Mars.

In the beginning of the year 2013, Mars will be in Capricorn sign. Transitions after that are mentioned below:

After this, the transition will continue in the year 2014. Therefore, it was all for the year 2013. However, mars is not going to transit from Libra, Scorpio and Sagittarius, but even then these signs will also experience the influence of Mars.

Let's now know about the planet Mars to know what happens when it transits.

Mars people always aim for big things. They never target on easy things. As per the notions made by many astrologers, people under the influence of Mars become good leaders, pioneers, warriors and explorers. People under the influence of Mars also possess special physical attributes like white complexion with pinkish glow, round eyes, muscular, tall and narrow waist. If we see from the career point of view, planet Mars rules the profession of dentists, surgeons, chemists, barbers, butchers and trades related to steel as well as iron; or you can say smiths industries, coral dealings, factories and allied businesses are related to the planet Mars.

This was all brief about the planet Mars with the transit chart of 2013. With this, we hope you get the blessings of Almighty to run smoothly with the effects of planet Mars.