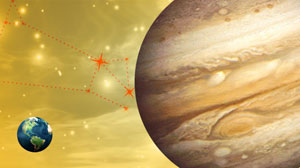 Jupiter transit 2013 is going to bring some considerable changes to your life. This article on transit of Jupiter in 2013 comprises the time in which the Jupiter will be transiting, with the related zodiac signs names. Like all other 6 planets and 2 nodes, Jupiter also affects everyone with its transit. Let's now know your time of change with the following Jupiter transit 2013 table:

In the beginning of the year, Jupiter will be present in Taurus sign. After that it will switch in the following:

So, this was all about the transit of Jupiter in 2013. Let's now know more on Jupiter.

Jupiter is a fiery, masculine, venerable, optimistic, liberal, cheerful, profitable and decent planet. Planet Jupiter rules over Sagittarius and Pisces sign. Therefore, people born under these signs or on Thursday possess the qualities of Jupiter. Such people are honest, sincere, law abiding and dutiful.

This was all about planet Jupiter and its transit in 2013. With this, we hope you will be able to transverse in 2013 smoothly.