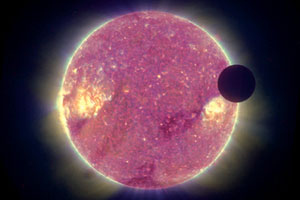 In the series of nine astrological planets, Moon comes at second place after Sun. If we consider it from astronomy point of view, it is the closest planet to Earth. However, it is not literally considered as planet in astronomy. It is the only natural satellite to planet Earth.

Now, let's get back to the astrology point of view. Like other astrological planets, Moon also puts some significant effects on the native. This planet is actually quite humid and cold. It rules the zodiac sign Cancer. This is the planet that gives good results if exalted but tough results when debilitated.

Moon shifts from one zodiac sign to another in a leap of mere 2.25 days. Planet Moon completes its one cycle in approximately 27 - 28 days. Some astrology experts believe that transit of the Moon is not as significant as other planets because of its short duration. However, its main importance comes while choosing a day for some special event.

As we know that Moon transits in every 2.25 days, so it is difficult to make a complete Moon transit chart. Over that, transit of Moon is of not much importance, as it doesn't put much effect on the native. However, we would like to tell you that in the beginning of the year 2013, Moon is in Cancer sign.

Transit of one planet means movement of a planet from one zodiac sign to another and from one constellation to another. Each transit of a planet brings changes to the native either in negative way or in positive. In order to keep a balance between these results and avoid any adverse situation, believers of astrology keep a transit calendar with them to prepare in advance for the upcoming trouble. Each planet has its own speed, it also depends on its distance from Earth; that is why each planet's transit time is different. Among all seven planets and two nodes, Rahu, Ketu, Saturn and Jupiter have long lasting effects. On the other hand, effects of planets like Moon and Mercury doesn't last for long, as they don't take much time in transiting.

With this general idea on Moon transit 2013, we hope you will able to understand a bit about astrological transits of the planets and value of Moon transit.