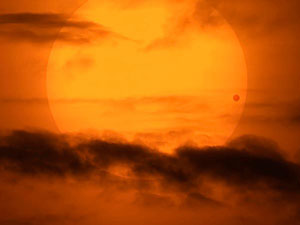 Venus transit 2013 is going to affect your life in some way. It could be favorable as well as unfavorable, depending upon the other planetary conditions of your chart. Transit of each planet affects all the people. Effects of transits are never confined to certain zodiac signs or people. Therefore, everyone should have an idea of the transit of each planet to find out its effects on you in advance. This will help you to guard yourself from the upcoming events. We never know what is coming. It could be something adverse wrapped into the sheets happiness or something really good immersed in the bucket of tears.

Understanding the inevitable need of transit knowledge, AstroSage has developed this article on Venus transit 2013 to help you know your time.

In the beginning of the year 2013, Venus will be present in Scorpio sign. After that it will transit as follows:

This was all about Venus transit in 2013. Let's now read further about planet Venus.

Hindus know Venus as Shukra Graha. Therefore, in Indian or Vedic astrology Venus is known as Shukra Grah. As we know all planets are considered as Gods in Hindu mythology. Lord Venus is considered as the mentor of Asuras (Demons). That is why he is also known as Shukracharya. As per astrology, Venus affects a person's life for a period of 20 years, in which the native is endowed with all material pleasures. It is believed that during this period the native cherishes abundant comforts, good times and affluence in life.
As per Hindu mythology, Lord Venus lost his one eye due to the injury given by Lord Vishnu. That is why if a person goes through the period of afflicted Venus, his eye suffer.

So, this was all general about Venus and its transit in 2013. With this, we hope you will direct your future toward welfare.