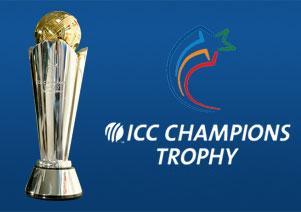 ICC Champions Trophy 2013 will be played in England at three different venues - Sophia Gardens in Cardiff, Wales, at Kennington Oval in London and at Edgbaston in Birmingham. Each of these three venues will host four matches of the ICC Champions Trophy 2013. A match between India and South Africa will invite all the Cricket lovers to step into the world of Cricket once again and enjoy every moment with all zeal and enthusiasm.

An interesting fact about ICC Champions Trophy tournament is that its first match was played in the year 1998. It was then known as the ICC Knock Out Tournament. Later on that name was replaced with Champions Trophy.

Since Champions Trophy's initiation, this event has been popular and even now, its fan following has not lessened in number, but grown immensely. In the ICC Champions Trophy, eight teams are selected on the basis of their performance in the previous matches. India, like always is going to participate in the tournament and, fingers crossed, it will perform spectacularly.

The ICC Champions Trophy is considered the most happening game after the Cricket World Cup. If you are a Cricket fan, then prepare yourself for the ODI or One Day International Cricket Tournament. For those whose cup of tea is not cricket, may need to freeze and re-think because Champions Trophy 2013 is going to be more thrilling and exciting than ever before. Some of you might be lucky enough to watch the Champions Trophy live, at the Stadiums in England. But those of you, who would not make it there, you need not worry. You have your TVs that will not allow your fun to be ruined and of course, your best friend - internet.