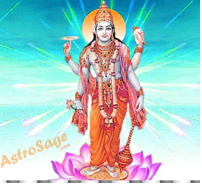 Ekadashi is considered as a pious day. It has a special significance in Hindu Shastras. Observing fast on this special day can change one’s life. Understanding the requirement of valuable day, AstroSage decided to develop this useful article on Ekadashi.

Ekadasi is accomplished with all the dates on which Ekadashi is falling. Apart from this, you will also get to know more about this unique day. Read more to explore Ekadashi.

Hindus follow lunar calendar and Ekadashi is the eleventh day of bright as well as dark fortnight of every lunar month. Ekadashi is considered as an auspicious day in Hindu religion and keeping fast on this day is really beneficial.

A lunar month is consisted of both bright as well as dark fortnight. Therefore, Ekadashi falls twice a month. One Ekadashi falls when Moon is closest to the Earth (perigee) and one falls when it is farthest (apogee). Also, these are considered as the times of high tide as well as low tide.

Ekadashi is indeed a very auspicious time. One should not leave any chance of utilizing this time for fetching the blessings of Almighty.

Concept of Ekashi was incepted with a boon acquired from Almighty. In ancient times, during the era of Satyuga, a demon named Murdhanav, son of Nadijang acquired a boon from Brahma Ji after a difficult penance. Due to which, it became impossible for Devas to defeat him. So, he misused his powers and defeated all Devas and replaced their positions with other demons. In grief and pain, Devas reached to Brahmaji for help. However, Brahmaji was also unable to help them, so he took them to Kshir-sagar (ocean of milk). There all Devas did tough penance to please the supreme power.

Lord was then pleased and gave them a boon. Then the Devas went to Chandravati (land of demons) to challenge the demons. There they fought like anything till 1000 years. After that, Lord became exhausted and hid himself in a cave. But, demon followed him to cave. Knowing his presence he sat in meditation and a light from all his eleven senses developed a Goddess. Demon got enchanted by her beauty and proposed her for marriage, but the Devi said that she will marry the one who will defeat her in fight. They started the fight, but demon couldn’t save himself. This made all Devas happy. When Lord gained consciousness he got to know everything and became very happy.

Then the Goddess said, “Oh Lord! I am born from your eleven senses that is why I am Ekadashi. And, I was born when you were in Taph that is why I am also Tapaswini. I have vanished all the demons; I will be the demolisher of all evil powers from the universe.”

Enchanted by her words, he asked her to seek a boon. Then she asked her for her wish and Almighty accepted that she belongs to her, and said she will be his better half in all Yugas. That is why the day of Ekadashi belongs to the supreme power and people utilize the best of it for demolishing evil troubles out of their lives.

With this article on Ekadasi, we hope you get what you desire utilizing the best of a year. So, start planning your year in advance.