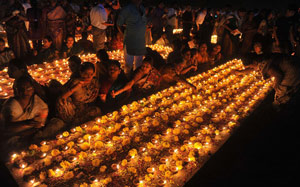 Kartik Purnima in 2017 will be celebrated on November 4. A number of tales and holy rituals are associated with this pious day. Known as the day of illumination, Kartik Purnima fills life of one and all with the light of prosperity and luxuries. Want to know how? Give this article a read.

This festival is also known as Tripuri Purnima and Dev Diwali (Diwali of the Gods). The name 'Tripuri Purnima' has been derived from Tripurari, which is the name of the foe of Tripurasura. According to Hindu scriptures, Tripurari is the name given to Lord Shiva as he defeated Tripurasura. On this day, Lord Shiva incarnated himself as Tripura Kanta and killed Tripurasura. In some legends describing Kartik Purnima, the term 'Tripurari' denotes the 3 sons of Tarakasur.

Tripurasura defeated all Gods and conquered the entire world. Apart from this, he created 3 cities in space and called them 'Tripura'. Lord Shiva came to the rescue of Gods and killed Tripurasura. Other than this, he demolished Tripura with one arrow and pronounced the day to be celebrated as festival of illuminations. This day is also considered as Dev Diwali (Diwali of Gods).

Kartik Purnima: Other Events Celebrated On This Day

Apart from this, Kartik Purnima is also known as the birthday of Matsya (incarnation of Lord Vishnu as fish). Also, it is the birthday of Vrinda who is the personification of Tulsi plant. Not only this; Kartikeya, the son of Lord Shiva and God of war was also born on this day.

On the other hand, this day has special importance for Goddess Radha, lover of Krishna (the incarnation of Lord Vishnu). It is believed that on this day, Lord Krishna worshiped Goddess Radha and performed Rasalila.

This day is also dedicated to the dead ancestors, known as Pitr.

On the day of Kartik Poornima, devotees take holy bath at sacred water body. This bath is considered as the most auspicious bath of the year and is known as 'Kartik Snaan'. This bath is taken at sunrise as well as moonrise of the day. In the evening after moonrise bath, devotees offer homage to the Almighty via 6 prayers, like Shiva Sambhuti, Satait and allied prayers.

Annakoot (holy food) is offered to the Almighty at the place of worship. Any type of violence is prohibited on this day. Apart from this, hair cutting, shaving, tree cutting, flower and fruit plucking, crop cutting and sexual union are prohibited on this day. It is believed that making donation on this day fetches blessings of the Almighty. Especially, when one donates cows, feeds Brahmins and observes fast. Gifting gold is believed to fulfil all the wishes and desires.

Tripuri Purnima is celebrated just the day after Maha Shivratri. As this day is celebrated to commemorate the defeat of Tripurasura by Tripurari, Lord Shiva is worshipped. Lamps are lit at temples for the entire night, as it is the day of illumination. People light 360 or 720 wicks at the place of worship in hope of getting salvation after death. 720 wicks symbolize the 360 days and nights of the years. During this time, all religious and spiritual places become alive with the lights of lamps, especially the Ghats of Varanasi.

Devotees give lamps to the priests as gift. This day is also known as 'Kartika Diparatna' and lamps look like jewels in the month of Kartik. The Diyas are also flown in small boats in water. Area around holy trees like Tulsi, sacred Fig and Amla are also kept lighted. It is believed that this light of lamps help creatures like fishes, birds and insects in attaining salvation by seeing the holy light.

This is how Kartik Purnima is celebrated all over India. Such a glorious festival, one should not miss the chance of celebrating it. With this brief article on Kartik Purnima, we hope you will make the best out of this time. Happy Kartik Purnima..!