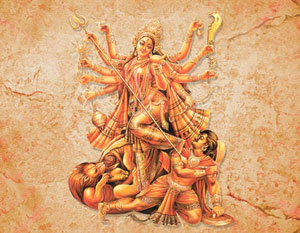 Navratri is basically a nine day Hindu festival. The word Navratri has been taken from Sanskrit. Basically, these are two words - Nava and Ratri that has been combined together to form the word Navratri. Nava literally means nine and Ratri means night. Hence, it is clear that the festival of Navratri is of nine nights.

During the festival of Navratri, Maa Shakhambari is commemorated. Festival of Shakhambari Navratri is celebrated with great zeal and gusto at certain places in India. These are - Badami, Bangalore, Nagewari, Kumbhoj, Saharanpur and Sambhar. The mentioned cities have got temples dedicated to Goddess Shakhambari.

Festival of Paush Navratri is not very famous amongst people; hence very few people celebrate it.

Maa Kali is known as the destroyer of bad things. Therefore, first three days of Navratri are meant to destroy all evil instincts inside us.

Second, the next three days are meant to worship Goddess Lakshmi to accelerate the inflow of wealth and prosperity in life.

Further, the final three days are meant to seek wisdom from the Goddess of wisdom, Maa Saraswati.

These three Devis help in making one's life prosperous and free from troubles. Hence, these nine nights helps in balancing everything in one's life.

First day of Navratri is dedicated to Goddess Shailputri. She is the companion of Lord Shiva and considered as the daughter of Himalyas.

Second day is dedicated to Goddess Brahamcharini. She is the Goddess of great penance and the way to salvation.

Fourth day of Navratri remarks the glory of Goddess Kushmanda. She is the creator of entire universe.

Fifth day of Navratri is typically dedicated to Goddess Skand Mata. She is the mother of Skand, the chief warrior of the Gods army.

Sixth day has its special significance for commemorating Goddess Katyayani. She is the Goddess with three eyes and four hands. Goddess Durga incarnated as Devi Katayayani to fulfill the desire of daughter of a disciple.

Seventh day of Navratri is known for worshipping Goddess Kaalratri. She is the destroyer of fear and makes her devotees fearless.

Eighth day of Navratri is celebrated in reverence of Goddess Maha Gauri. She exhibits wisdom and represents calmness.

Ninth day is to commemorate Goddess Siddhidatri. She is known to be having supernatural healing powers. She is the one who can bless one's life with all forms of positivity. Maa Siddhidatri has got four arms and poses in a beautiful blissful manner. She blesses all the saints, yogis, devotees and allied people. According to mythology, Lord Shiva worshipped her and got blessed with all the Siddhis. She is the Goddess of all Siddhis. Due to her boon, Lord Shiva turned half male and half female. This Avatar of Lord Shiva is known as Ardhanarishvara.

Each Goddess has her own importance and bestows the life of her devotees with related powers. Hence, worshipping each form of Goddess throughout the entire nine day festival can make one's life quite blissful.

All five festival of Navratri are same, along with the process of celebration. It just varies region to region.

With this article on Paush Navratri, we hope you will fetch the blessings of the superpower, the Goddess Durga and make your life more happening. Happy Paush Navratri 2013!