Sankashti Chaturthi in 2013: The day to end all your troubles 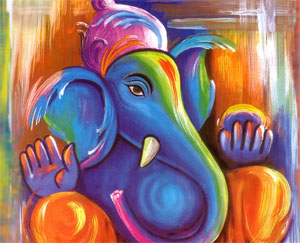 Ganesha: The Lord of Intellect and Knowledge

Ganesha is the Lord of intellect and knowledge. It is believed that the Lord imparts wisdom and lights a lamp of knowledge when we are engrossed in the darkness of ignorance. So let us all observe the auspicious day of Sankasthi Chaturthi and surrender ourselves to Lord Ganesha. It is believed that observing the Sankashti Chaturthi can bring happiness, bliss and prosperity into one's life.

The Mythical Legend of Sankashti Chaturthi

Once Lord Indra was on his way to his heavenly abode after seeing saint Bhrushundi. Saint Bhrushundi was a great devotee of Lord Ganesha. Indra was on his celestial plane. When he was flying over the kingdom of King Sursena. The king was moral and honest. While the plane was flying, it suddenly came to a halt and landed over the land of the King Sursena.

The Lord told the king that the plane would fly again only if it would be seen by a person who had fasted on the previous day. The previous day was Chaturthi. The king sent all his soldiers to different parts of the kingdom to find out the right person to fulfill the task. When the soldiers were returning unsuccessfully, they saw Ganesha Duta taking a body of an old woman. They asked the Dutas for the reason of taking the woman's body. To which they replied that the woman had slept all day and woke up at the Moonrise to have some food. Therefore she accidently fasted on the Sankashti Chaturthi which washed off all the sins which she had committed in her lifetime.

The soldiers requested the Dutas to let them use her virtue and help Indra's plane to fly again. The Dutas refused and carried on with their task. Just then, the wind blew, carrying away the old woman's virtue to the plane that made it fly again. This shows the power which the day of Sankashti Chaturthi possesses.

Sankashti Chaturthi is celebrated like any other Hindu fast. People wake up early in the morning and take a bath. They decorate the idol of Lord Ganesha and observe an all day long fast. They begin the day with Ganesha aarti and seek the divine blessings. In the evening, when the Moon appears, devotees light diyas to please Lord Ganesha and sing his arti.

Moon has a special significance on the day of Sankashti Chaturthi. A special puja is performed for the Moon and it is offered Bhog (Prasad). Then banana, coconut and sweets are offered to the Lord. The flowers of Hibiscus and Durva with leaves of some plants are offered to the idol of Lord Ganesha. The Prasadam is also offered to the Moon. This day is considered highly auspicious as the day removes obstacles and troubles which keep you away from your destination. The given Mantra is recited to please Lord Ganesha:

Ganesha is the Lord of wisdom, intellect and knowledge. The world is filled with the darkness of ignorance and to pray to the Lord would be like lighting a diya. Let us all come together to illuminate the world and end the darkness forever. May Lord Ganesha lead our path towards light and awareness. Ganesha is considered very auspicious. To begin a task with his name brings success. In the Hindu Religion it is believed that no Puja will be rendered complete unless it begins with the Ganesha Puja. People also place a Ganesha idol at the entrance as it brings good luck and happiness into the house.

We wish all the readers a very happy and prosperous Sankashti Chaturthi. We hope that the Lord ends all your troubles and brings a new beginning in your life.