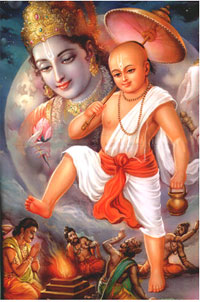 While celebrating Vamana Dwadashi in 2013, we should read about the legend associated with it. Lord Vamana is the incarnation of Lord Vishnu. The reason for his taking a human form was to end the powerful rule of King Bali. By performing great austerity he had grown more powerful than the Devas which was not well taken by the Devas. They all went to Lord Vishnu and asked Him for help. Lord Vishnu promised them that he will incarnate as Vamana and end the rule of King Bali. Like said, Lord Vishnu was born to Saint Kashyap and his wife Aditi. A son was born to Aditi on the Shukla Paksha of Bhadrapadh. The child grew up to be a drawf.

One day he went King Bali asked three steps of land. and Holding an umbrella in his right hand, a pot in his left and wearing a saffron dhoti he went to the kingdom of King Bali. It was a well known fact that King Bali was a great philanthropist. He never sent anyone empty handed. He had earned a reputation being very helpful. So when Vamana showed at his doorstep, he did not refuse him. He could not recognize Vamana's true identity and agreed to give him three steps of land. Vamana began to take a giant size and became so huge that he covered whole universe in two steps. He then asked King Bali to give him the space to put his third step on. At that moment King Bali realized his fault and bent before the Supreme Lord Vishnu and offered his head to be stepped on. Such act pleased Lord Vishnu and he blessed him to rule the nether world.

The Significance of Vamana Dwadashi

The day shows that we should not be proud of our achievements. The day therefore teaches us humility and modesty. By observing this day we can burn the effects of past sins and make a new beginning. There are many temples which are dedicated to the Lord Vamana. Vamana Ekadashi is celebrated a day prior to Vamana Dwadashi. Vamana Ekadashi is celebrated by observing a fast dedicated to Lord Vishnu. The day is considered very auspicious and carries a great spiritual and religious significance. Vamana Ekadashi fast is completed on Vamana Dwadashi.

It is believed that by chanting and worshipping Lord Vishnu on Vaman Dwadashi a person can get relieved from all the mistakes and sins which he has committed knowingly or otherwise. The importance of the day also lies in the fact that the Vamana Ekadashi fast will not be completed until the Dwadashi.