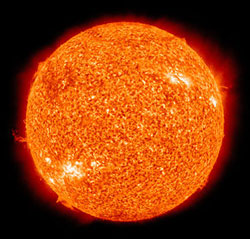 Like every other astrological planet, Sun transits to each zodiac sign in a month and this transit brings some significant changes to one's life. Believers of astrology always keep an eye over transits because they affect everyone. Sun is the planet that puts positive as well as negative effects on a person, depending on his birth chart. Let's move further to know more in detail about Sun and its transit in 2013.

Sun is the planet of great significance in Hindu mythology and is considered as the king of all planets. As per Hindu scriptures, Sun is considered as God. He is the deity of nature. Indeed, Sun gives us energy and motivates us to move further by rising early in the morning every day.

When Sun rises, spreads orange light all over the Earth. Birds wake up and start their day with musical chirp. This ecstatic environment spreads lustrum warmth everywhere. Indeed, Sun is a great power! Imagine life on Earth without Sun! It is simply impossible.

Sun has a very deep astrological significance, but we will first look up to the dates of Sun transit in the year 2013.

Following are the details of Sun Transit in 2013:

Sun is the ruling planet of zodiac sign Leo. Therefore, people who are born with Sun as a ruling planet are born either on Sunday, in Leo sign or Sun in ascendant.

People born under the influence of planet Sun bestow the feeling of true love. Certain characteristics of such people are - individuality, strong will, royalty, boldness, magnetic nature, energy, brilliance, kind heart, dignity, kingly, optimism, ambitious and well-reputed. A person possesses these qualities with a beneficial Sun.

On the other hand, an afflicted Sun leads to - bluff, arrogance, anger, lavishness, jealousy, irritability, over ambitiousness and ego.

So, this was the general idea about Sun and Sun transit. We hope this will help you.