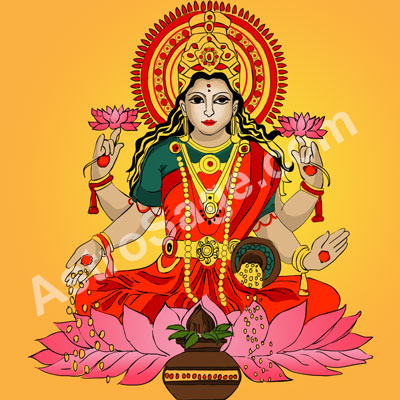 History Behind The Vara Lakshmi Vratham

While celebrating Vara Lakshmi Vratham, it is a good idea to know the legend behind it. Once there was a Brahmin woman who lived in the Kingdom of Magadha. Her name was Charumathi. She lived in a small village of Kundina. She lived there with her husband. She was devoted to her family to a great extent. Goddess Lakshmi was impressed by her devotion and appeared in her dream one night. She asked Charumathi to worship Varalakshmi and seek blessings to fulfill all of her wishes. Varalaxmi is another form of Goddess Lakshmi, the consort of Lord Vishnu. Goddess Laxmi is the Goddess of wealth. The Goddess prescribed her to fast on Friday of the month Shravan, preceding the full Moon night.

Charumathi narrated her dream to her family and everyone encouraged her to perform the Pooja. Many other women in the village also joined her in Pooja. They performed the Pooja with utmost devotion and heart.

The Story Behind Vara Lakshmi Vratham

Once, Parvati and Parameshwara were playing the game of chess. Parvati was winning each game consecutively, but it is believed that Parameshwara was deliberately claiming to win the game in order to increase the curiosity of Parvati.

Parvati decided have an umpire, and for this purpose, Chitranemi was chosen. He was the creation of Parameshwara. He took the side of Parameshwara and this magnified Parvati's anger. She cursed Chitranemi that he would become a leper as he has discharged his duties in an unjust manner.

Chitranemi begged Parvati to relieve him of the curse. She said that he can only get rid of the curse if he observes that Vara Lakshmi Vratham. By doing this, Chitranemi got rid of this disease.

The Vara Lakshmi Vratham is a popular festival of the southern India. It is celebrated mostly in the southern states such as Andhra Pradesh, Tamil Nadu and others. On the occasion of Varalakshmi Vrat, women will observe fast. The preparations for the festivals start a day before. Women take bath early morning and worship Goddess Lakshmi with utmost devotion. They worship for the well being of their husbands and children along with the entire family.

The Significance Of Vara Lakshmi Vratham

In total, there are eight forces of energy. The eight forces are wealth, earth, learning, fame, peace, pleasure and strength. They are collectively called as Ashta Lakshmi or eight Lakshmi. These eight forces are worshipped as lakshmi, as the eight abstract forces cannot be identified, so they are personified as goddess lakshmi. It is Goddess Lakshmi who is known as the Varalakshmi and the Vara Laxmi Vratam is also celebrated in her honor. Goddess Laxmi is a woman and it is believed that only a woman can understand the feelings of a woman. Therefore, this is a festival of women and is celebrated and observed mainly by the women. The festival of Varalaxmi Vratam is celebrated by women in order to invoke the blessings of Goddess Lakshmi to be showered on the husbands and children of these women.

Celebrate the Vara Lakshmi Vratham with sheer joy and enthusiasm to get the blessings of Varalakshmi. Happy Varalaxmi Vratham..!