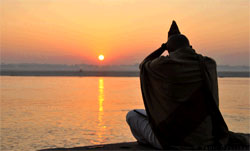 It is better to win over self than to win over a million enemies. There is no enemy out of your soul. The real enemies live inside you; they are anger, proud, curvedness, greed, attachments and hate. –This Malmas let's begin a journey of righteousness.

The traditional Hindu calendar considers the Lunar Months. The Lunar month days are shorter than the solar month day. So while a solar calendar has 365 days a lunar calendar has 350 days. The extra 15 days of a lunar calendar, add on to make an extra month in lunar calendar, every three years. This extra month is known as Adhikmas , Malmas or Purushottammas. This year, Malmas 2013 is falling in 'Bhadrapad month' of Hindu Calendar and so can be called 'Bhadrapad Adhikmas '. The Lunar Calendar year 2013 is a year of Malmas. Malmas 2013 is starting on Saturday 18th August 2013 and will continue till the Sunday midnight, 16th of September 2013. Since ancient times Malmas is dedicated to the one of the greatest Hindu Gods- Sri Krishna.

Malmas is also known as Kharmas and is considered really important in places like Madhya Pradesh, Bihar, Jharkhand and in parts of eastern Uttar Pradesh. It must be noted that calendars followed in Western parts of India, Eastern parts of India and South do not observe Malmas.

Moving on, what does the word 'Malmas' mean? Malmas means an impure month of a lunar year wherein Hindus refrain from beginning anything new and significant. The reason behind this is that there is no Sun transition during this month and so this belief. Scholars of ancient Indian astrology believe this month to be inauspicious. So, just in case you're planning to buy something new or have plans of starting things new skip Malmas 2013, as there is no Sun transition during Malmas. Although, inauspicious for starting anything new Malmas 2013, can be spent in self purification of one's inner self.

Before going into details about what you should do for self purification, here are things you should not do during Malmas 2013. Avoid marriages, Mundan, Grih Pravesh of a new bride, yagyapaveet , buying new clothes and wearing it , buying new machinery ( like cars and home appliances , electronics) , Naam karan , establishing an idol for worship , laying the foundation of a new house , well, factory , reservoir , garden , buying gold, acquiring property , starting Kamya vrat , donating weights and cow etc. In a nutshell anything new and significant should be avoided during Malmas 2013. It's good to consider consulting a pandit and check for greater details about what not to do this Malmas 2013.

Moving ahead from what not to do let's find out how Malmas 2013 can be used as a period of self purification or moving from ignorance to enlightenment , from sin to righteousness. Conducting Puja , Yagna, Mantra Jaap are means to get closer to your belief and faith. Evaluating your past deeds and promising to mend what went wrong is a commitment that needs courage and can help in self awareness. Serving mankind and indulging in religious activities is a way to reach God and purify the soul. Above all renouncing all evil emotions like greed, anger, selfishness and jealousy can help one rise above human weaknesses and purify an individual's conscience.

Here's a list of things you should do during Malmas 2013:

Here's a mantra to recite during Malmas 2013:

The origin of Malmas is explained in the Padma Purana. Here's how belief goes about Malmas and its origin. Each month in the Lunar calendar has a presiding deity, When all deities rejected Malmas as it was an inauspicious month without Sankranti . Feeling dejected Adik Mas as personified expressed went to Lord Vishnu in dejection. Lord Vishnu sent him to meet Lord Krishna , who blessed the month and called it his own. He gave the month his own name and called it Purushottama Mas."The Lord then added, "I will forgive all the sins of those who perform penance in Purushottama Adhik Mas."

Belief has it that keeping a fast on the first day of Malmas is very auspicious. Those who fast on this day are blessed by Lord Krishna, who forgives their sin. On the last day of Kharmas, also known as Malmas 2013; one should get into donation, charities and worship. Donating religious scriptures like Ramayana, Gita etc. is also considered to be auspicious in Adhikmas. The same goes with donating clothes, food, jaggery and ghee. This Malmas 2013, move from darkness towards light and discover the element of godliness in you –be the change you wish to see in the world around and get closer to your faith in the divinity of Lord Krishna.