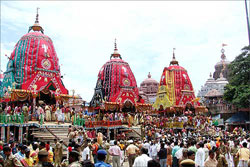 Jagannath Rath Yatra 2017 (Car Festival 2017) will go on from June 25 to July 3. Followed by Hera Panchami on fourth day of the festival, Temple Car will wrap up with Bahuda Jatra. Read further to know in detail about the great festival of Puri Jagannath Rath Yatra!

Jagannath Rath Yatra 2017 (Car Festival 2017) will commence on June 25 and will come to an end on July 3. As dates of almost all Hindu festivals are decided as per the lunar calendar, Car Festival 2017 dates have been also decided accordingly. According to the Hindu calendar, Rath Yatra is celebrated every year in the month of Ashadh. According to Gregorian Calendar, this beautiful festival is celebrated around the months of June and July. Every year, this Rath Yatra (Temple Car) is organized on quite a grand level in Puri, India.

This colorful festival of Puri, Jagannath Yatra attracts millions of people from all around the world. People also know this festival as 'Car Festival'. As per belief, Lord Jagannath, the Lord of the universe, steps out of his Sanctum Sanctorum. In order to get his blessings and attain salvation, people of all communities participate in this Car Festival.

Lord Jagannath is also considered as another form of Lord Vishnu. Jagannath Temple is one of the four Sanctum Sanctorums of India. These four Holy stations are collectively known as 'Char Dham'. It is believed that if a person travels through all these four Holy Sanctum Sactorums attains salvation.

At Puri, Lord Jagannath is worshipped along with His brother Balabhadra and sister Devi Subhadra. Car Festival commemorates the annual visit of Lord Jagannath to the Gundicha Mata Temple.

Gundicha is the name of a Queen, who was the wife of King Indradyuma. King built the Puri Jagannath Temple in honor of his wife's devotion. In exchange of her hearted love, Lord Jagannath, Balabhadra and Subhadra visits the Gundicha's temple every year and also spend few days there.

Just before a day to Jagannath Rath Yatra, devotees clean the entire temple and this ritual is known as Gundicha Marjan.

Puri Jagannatha Rath Yatra is such a grand festival that its preparations begin much before the commencement of main day. Lord Jagannath, Balabhadra and Devi Subhadra are given royal bath around 18 days before the beginning of Car Festival. This ceremonial bath is known as Snana Yatra. Ritual of Snana is performed on the Purnima (Full Moon Day) of the Hindu month Jyeshtha. This Purnima is popularly known as Jyeshtha Purnima.

Fourth day after the commencement of Jagannath Rath Yatra, Hera Panchami is celebrated. As per Hindu mythology, Goddess Lakshmi visits Gundicha temple on this day looking for her husband, Lord Jagannath.

Hera Panchami should not be confused with the Panchami Tithi (Fifth Date). It is because Hera Panchami is celebrated on the fourth day and as the Temple Car begins on Dwitiya (Second Date), fourth day of Hera Panchami will definitely fall on Shashthi (Sixth Date).

Jagannath Yatra (Temple Car) goes on for next eight days. After that, Lord Jagannath moves back to his main abode. The returning of Lord is known as Bahuda Jatra (return journey). Bahuda Yatra happens on the eighth day after Jagannatha Rath Yatra begins. Hence, the date that falls is tenth, which is known as Dashami in Sanskrit. While Bahuda Yatra is on, Lord Jagannatha takes a short stay at Mausi Maa Temple. This temple is dedicated to Goddess Ardhashini.

The thing that needs to be noticed is that Lord Jagannath returns to his main abode exactly before Devshayani Ekadashi, as on this Ekadashi Lord Jagannath goes to a sleep of four months.

The international devotees who are not originally Indian or Hindu know this entire festival as Car Festival. The famous Temple Car is originally Jagannatha Yatra.

Puri Jagannatha Rath Yatra or simply Jagannath Yatra is one of the biggest tourist attractions of India. Also, it holds quite a considerable spiritual significance. You people may also become the part of this auspicious festival by knowing the dates in advance. So, book your tickets to Puri and make this festival bigger than ever. With this brief article on Puri Jagannatha Rath Yatra, also known as Temple Car or Car Festival, we hope you get the immense blessings of Almighty. Happy Jagannath Rath Yatra 2017!