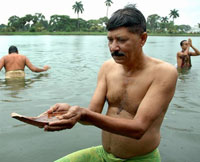 Pitru Paksha in 2017 is from September 5 to September 19. It is the sixteenth lunar day period which is dedicated to our ancestors and forefathers. Pitru Paksh begins on poornima (full moon day) of Bhadrapada (September) and ends on Amavasya (no moon day) of Ashwani month in Shukla Paksha (waxing moon period). During this period people pay homage to their pitru (ancestors), as Pitru Paksha is 'fortnight of ancestors'. And offering food and performing rituals for dead ancestors is also known as Shradh Pooja. They perform pooja and rituals for the departed souls of dead forefathers or ancestors. Pitru paksha is performed by children or relatives for their dead ancestors and forefathers. For other religious purpose, this period is considered inauspicious. It means Hindu people do not initiate or start any important work during period of Pitri Paksh. Beginning day of the Pitru Paksha is considered as 'Purnima Shradh'. On this day, Mahalvya pitru Paksha begins. And last day of Pitru Paksh is considered as Amavasi Shradh. Mahalvya Pitru Paksh ends on this day. However, Hindu people can perform rituals for Shradh in all Amavasya or no moon days. But Pitru Paksha of Bhadrapad-Ashwin month which lasts for 16 days is considered the most important period for performing Shradh. Tarpanam, Shradham, Pitri Paksha, Sola Shraddha, are various names used for Pitru Paksh. The customs and rituals attached to Pitru Paksha Shraddh vary from region to region. Many close relatives also observe fast on the shradh day for peace of soul of their dead ancestors. Most people avoid non-vegetarian food during the occasion of Pitru Paksh. While some people do not cut their hair or shave relatives perform customs and rituals under the guidance of a learned person or priest. After shradh pooja food is offered to dead forefathers.

Why relatives perform shradh pooja for their ancestors during Pitru Paksh?

Shradh pooja cleans all sinful acts committed by their dead ancestors when they were alive. This way shradh Pooja makes soul of dead ancestors pious.

Relatives should perform Shradh pooja with pious heart and mind. It gives proper result in shradh pooja of their dead ancestors. Shradh pooja holds a very important place for Hindu people. And many consider this obligatory. Hindu people believe that after death it is earnestly important to have peace of soul. And therefore, Shradh Pooja is religiously performed in temples, shrines and places near the banks of holy rivers.

May this Pitra Paksh bestow abundant peace to the soul of your dead ancestors!