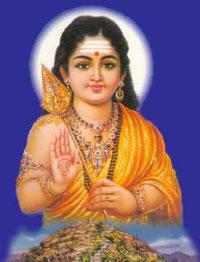 Skanda Shasti in 2012 is on November 14 to 19. It is a six day grand festival of Tamil Nadu and other regions of South India. Skanda Shashti is dedicated to Lord Muruga. Skanda is the name of Lord Muruga owns many attributes. He is often depicted as six-faced and twelve-armed. Lord Muruga is also honored as a fearless defender of righteousness. People observe fast, perform functions and worship Lord Muruga on these days. Skanda Shashti begins on Hindu month of Kartik in shukla pratipada (bright fortnight) which corresponds to Tamil month Aippassi (October-November). Lord Muruga is second son of Lord Shiva and Parvati who is also admired with name 'Kartikey' by people of North-India. South Indian people worship Lord Muruga with other names like Lord Subramanya, Kumaresa, Guha, Murugan, Shanmukha and Velayudhan and so on. It is believed that Skanda Shashti day is celebrated to commemorate the annihilation of mythical demon Tarakasura by Lord Kartikey. Six-day carnival of this festival is majestically celebrated in all shrine-places or temples of Shaivite and Subramanya in South India. Devotees celebrate this day with the dramatic enactment of Soora Samharam to commemorate destruction of evils by Supreme Being-Kartikeya. Devotees perform chariot procession and invoke pooja to get protection and grace of Lord Muruga.

It is mentioned in Vedic Scriptures that a devil named Tarakasura was a massive and mythical giant who tortured rishi muni and devtas to gain his authority over them. He desperately wanted the regime of Lord Indra and wanted to kill all deities. Tarakasura was immortal and no one had power to destroy him except the Son of Lord Shiva and Parvati. And finally the time came when Kartikey emerged on earth and victoriously finished devil Tarakasur and made everyone free from his tyranny. That day emerged as victory of light over dark.

On the auspicious carnival of Skanda Shasti, religious people joyfully participate in grand worship of Lord Muruga to show splendor celebration. Generally, this festival begins six days before the Sashti day. And the concluding day is known as the day of Sashti. During these sacred days, religious people and devotees spiritually offer invocation, recite inspiring hymns, read stories of Kartikey or Lord Subramanya to commemorate the victory of Lord Muruga over devil. During these days, thousands of devotees gather for feasts to offer their prayers to Lord Murugan. On these propitious days, huge amounts of camphor are burnt, flowers and varieties of blessed food and fruits are offered to Lord Muruga. Thousands of people gather in a place and perform chariot procession for Lord Muruga. They take part in Pooja in temples to get protection and abundant grace of Lord Muruga. The festival symbolizes Skanda's obtaining abundant power and spiritual enlightenment. Devotees commemorate triumph of spiritual light over darkness from beginning to final day of this six-day festival. It is believed that fasting, austerity, penance, and worshiping Lord Muruga are abundantly fruitful during this carnival.

It is strongly believed that Skanda Sashti is the powerful time-period to quickly increase your strength and to enhance positive vibrations for power that makes you bright and healthy.That is why religious people attend chariot procession and worship Lord Muruga with depth of their heart and devotion to obtain positive strength in body. From beginning of the day to concluding day of Skanda Shashti worshiping Lord Kartikey you can certainly notice powerful positive aura coming in your mind and spirit. Worshiping Lord Muruga during these days also helps devotees to achieve success in life by attaining immense blessings of this deity.