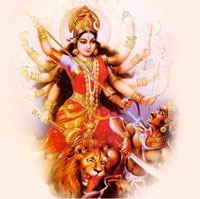 Kali Puja as well as Diwali fall on the same day and both have similar significance of victory of good over evil. East Indian states celebrate Kali Puja to grant protection from Maa Kali and rest of the India worships Maa Lakshmi for comfort as well as luxuries in life. However, these two festivals have some differences because the Goddesses have their own significance. Let's read more to know the connotations of Kali Puja in India.

Kali Puja in 2012 is scheduled on 13th of November, as per the readings from Hindu lunar calendar. This auspicious festival is dedicated to the Hindu Goddess Kali. Kali Puja is especially celebrated amongst the people of Bengal, Orissa and Assam; whereas others celebrate Diwali on this day. When the people of these three states will be worshiping Goddess Kali and rest of the India will worship Goddess Durga for Diwali celebration. According to the Hindu calendar, every year, Kali Puja is celebrated in the month of Ashwin and on the new moon day.

Who invented Kali Puja and How?

Trend of Kali Puja celebration is not ancient. It was first introduced in Bengal during 18th century by Raja (King) Krishnachandra of the place 'Navadvipa'. He found it in a devotional text called 'Kalika Mangalkavya', which was written by Balram in the late 17th century. Further, the auspicious festival of Kali Mata Puja gained popularity in 19th century with the help of Ishvarchandra, grandson of Krishnachandra and wealthy people started patronizing this beautiful festival on a large scale. Since then, Maa Kali Puja is celebrated with Durga Puja.

According to the legends, once there were two demons named Shambhu and Nisambhu who challenged Lord Indra and attacked his heaven. After several battles, demons defeated the Gods and established their supremacy. The powers of the demons were increasing rapidly and Gods flew to refuge in Himalayas. There they pleaded Lord Shiva and Goddess Parvati. Ma Parvati is also known as Goddess Durga. She answered their prayers and incarnated Maa Kali from her forehead.

Mother Kali lost her control while killing the demons and she started killing each & everyone who came in front of her. Kali Mata killed all the demons and made a garland of their heads. She became horrible and nobody dared to control her. However, Lord Shiva took the charge and lay down in the way of Goddess Kali. When she stepped over him, she restored to her senses and stopped the carnage. So, every year, Kali Puja is celebrated in honor of this day. Devotees worship Goddess Kali to seek blessings and protection from evils, wars as well as natural disasters.

Kali is considered as the Goddess of death and energy. The word Kali is originated from the Sanskrit word 'Kaal', which means 'Death'. As per the Hindu mythology, she is the first incarnation of Goddess Durga amongst ten and the most terrifying of all the Goddesses. The idol of Kali, which is worshipped is made with her foot over Lord Shiva with her tongue out, a garland of 52 skulls around her neck, a severed head in one hand and a sword in other and a skirt made up of dismembered arms.

Kali Pooja is basically a tantric puja, which is performed at the midnight of a new moon night (amavasya). Bengalis celebrate this day on the grandest level. Same like Diwali, people decorate their houses, light lamps and make rangolis in their courtyards. They worship Goddess Kali to destroy all evils and darkness from inside as well as around people. The devotees meditate throughout the whole night till dawn. Bengalis leave no stone unturned in the celebration of Maa Kali Pooja.

Like every year, this year too, the devotees will set up the pandals on this festival. At Kolkata, people celebrate this festival in cremation ground too. The devotees sacrifice the lives of animals to enchant Goddess Kali. Vaishnav believers celebrate it in a different way by decorating the idols of Kali and their houses, chanting Kali strothas, Kali mantras, Kali songs and cooking various delicious dishes on this day. However, in most of the India Vaishnav devotees celebrate this festival as Diwali. That is why Kali Pooja is considered as Tantric Diwali sometimes, but factually Diwali and Kali Puja are two different festivals that are ultimately celebrated to enchant Goddess Durga in different ways.